Mois Navon, Microchip Designer, Speaks About the Intersection of Invention and Belief 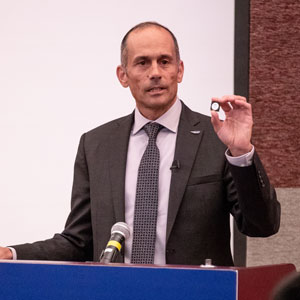 On September 4, 2018, Mois Navon, one of the founding engineers of Mobileye and designer of EyeQ, the chip powering the development of self-driving vehicles, spoke to an audience of computer science students from both campuses, YU faculty and staff, and members of the community about how his professional career was powered by the rediscovery of his Jewish roots and his embrace of Jewish teachings and wisdom.

At one point in his life, the self-described “secular surfer” growing up in Los Angeles came across a question for which he could find no answer: if we all eventually die, what is the point of living, of life itself? His search for an answer was unsuccessful until he participated in an engineering internship at the Jet Propulsion Laboratory in Pasadena, California. His mentor was an Orthodox Jew, and they had many deep discussions about faith, Jewish philosophy and science. “He said to me, ‘We believe that there is a creator, that you have a soul and that there is a purpose: you’re here to fix yourself, and you’re here to fix the world.’” These ideas resonated with Navon so strongly that he pursued semicha [rabbinic ordination] from Mercaz HaRav and made aliyah to Israel.

Making a life and a living in Israel was not easy, and Navon recounted the many trials and tribulations that eventually brought him to Mobileye, where the company (after its own trials and tribulations) managed to develop a technology that made autonomous driving so efficient and effective that Intel, the giant chip maker, bought the company in 2017 for $15.3 billion. Navon attributed his personal and professional success to a deep intersection of Jewish faith and secular technology: “Technology is the spearhead of tikkun olam; it is what is helping make the world a better place.” He illustrated this by recounting what he believes will be the incredible benefits autonomous vehicles will bring to the world, including a significant reduction of people killed annually in accidents.

After his life’s journey, he has found an answer to the question that confronted the secular surfer: “You should come to Israel for the very fact that that is what you were created for. Israel is the home of the Jews. There is a creator, you have a soul, there is a purpose: we’re here to fix ourselves, we’re here to fix the world.”