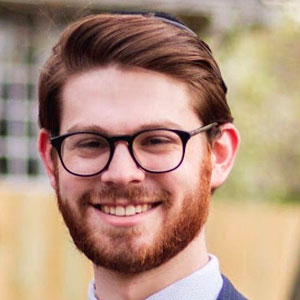 Many students use their summer breaks to pursue their individual interests, and Dovid Schwartz, who just finished his junior year double-majoring in philosophy and Jewish studies with a concentration in Jewish thought, has taken this to heart. He enrolled in two intensive workshops this summer: a concentrated one-week study of the thought of Leo Strauss hosted by The Salvatori Center at Claremont McKenna College in Claremont, California, and a seven-week program at the Hertog Foundation in Washington, D.C., to explore the theory and practice of politics.

Schwartz pursued these studies to investigate the philosophical foundation of politics. “I concentrate my studies in philosophy,” he said, “to whatever extent I can on political thought, but I don’t do political science strictly speaking.”

Schwartz grew up in Chicago and lived for a time in Los Angeles before moving with his family to Teaneck, New Jersey. He attended the Marsha Stern Talmudical Academy/Yeshiva High School for Boys (MTA) then enrolled in Yeshiva College. “I’ve been on the YU campus for seven years now,” he pointed out, “and the transition from MTA to YU was very natural.”

It was while he was at MTA that he became interested in philosophy. “I was introduced to the discipline by Rabbi Shalom Carmy in a course I took with him as a senior, and we’ve remained close ever since. I also worked with Rabbi Dr. J.J. Schacter, where he mentored me on an essay I wrote for a senior capstone project. Both of them have been extraordinarily influential on my thought, and I think pursuing Jewish studies and philosophy followed naturally from working with them.” (Rabbi Carmy is assistant professor of Jewish philosophy and Bible; Rabbi J.J. Schacter is University Professor of Jewish History and Jewish Thought and senior scholar at the Center for the Jewish Future at Yeshiva University.)

His interest in the discipline was only strengthened when he entered Yeshiva College. “I came under the enormous influence of the Zahava and Moshael J. Straus Center for Torah and Western Thought, especially Rabbi Dr. Meir Soloveichik, director of the Center, and Dr. Neil Rogachevsky, an instructor there. They pushed me and guided me to political philosophy and political thought. All four of these mentors continue to remain very influential.”

Schwartz was intrigued by Leo Strauss’ meditations on the existence of what Strauss called “natural law” and “natural right” and the impact of these concepts on the practice of politics in particular and human interactions in general. “Philosophically, the main question for me is this: if natural law is a fact of the universe—that there is such a thing as ‘good’ and ‘bad’—how does that impact how we view the role of government, freedom for citizens, policy-making? It’s both a far-ranging and practical philosophical issue and something that I found very important.”

As he pondered the issue of natural law while attending the Strauss workshop, Schwartz worked to square Strauss’ teachings with his religious faith. “As an Orthodox Jew, I definitely believe that there is such a thing as justice and virtue and morality that are facts of the universe. I also believe that as individuals and a society, we must pursue these values; if we don’t, it is to our own detriment and loss.”

But while he agrees with Strauss’ emphasis on natural law, he does disagree with Strauss’ statement that there is an unresolvable opposition between philosophy (or “reason,” as Strauss called it) and religious revelation. To Schwartz, Strauss seemed to be saying that “revelations from God would obviate the need for any philosophical investigation because we would then have all the answers from what God has revealed. I very much disagree with him about that. Even though God gave us the Torah, I still believe that there is room for philosophical investigation of the law He gave us. We might have the answers in a certain sense—in other words, we know that we can get there—but there is a lot of work to be done in thinking about these crucial issues.”

At Claremont McKenna, “I learned about the richness and seriousness of the enterprise of thinking about natural law and natural right and the impact this kind of thinking has on my life as an Orthodox Jew and our life in general as Americans and Westerners and members of mankind. For instance, when a policymaker is drafting tax code, he or she may not be thinking about these questions of natural law, but that person has a very specific conception of ideas like ‘how do we live good lives,’ which will undoubtedly impact the particulars of any decision. That is why thinking about these ideas is very urgent.”

His time at the Hertog Foundation has been equally intense during the seven-week session (which ends in August). Schwartz has been able to select seminars from a list that includes liberal education; ancient and modern philosophers; statesmanship; traditions of freedom; American political thought, literature and politics; American democratic capitalism; varieties of American conservatism (including discussion of the Supreme Court) and grand strategic thinking (which touches on China and Russia).

During his first week there, he attended a series of lectures by Dr. Peter Berkowitz, the Tad and Dianne Taube Senior Fellow at the Hoover Institution, Stanford University, titled “What is a Liberal Education?” Schwartz became inspired and excited by Berkowitz’s argument in favor of the necessity and primacy of a liberal education, which resonated with his own beliefs about philosophy and action in the world. “As an Orthodox Jew, I define my worldview by our Torah and our traditions—this is the first and last word on every matter,” he explained. “That being the case, I think certain ideas in the Western canon that you might classify as classical liberalism are capable of illuminating ideas in our own traditions, such as the good society, human excellence, human dignity and virtue.”

As he moves into his senior year, Schwartz plans to start studying for semicha [rabbinic ordination]. He will also apply for a scholarship to Cambridge University in England to pursue an MPhil, focusing his study on the influence of the Bible on John Locke’s political thought.

“My goal in life is to teach Torah—that is my overwhelming passion,” he states. “Leading the life of an academic, perhaps as a law professor, as a way to teach about Torah, about Jewish thought, Jewish philosophy, the philosophical traditions of the Talmud, the intersection of Western and Jewish philosophy—that’s where I think I can best serve the world of Torah with my abilities.”