One week after the holiday of Shavuot, we’ll mark the 53rd anniversary of a remarkable day—June 7, 1967—when Israeli paratroopers entered the Old City of Jerusalem and reached Har Habayit, the Temple Mount, an area that had been off limits to Jewish people since the establishment of the State of Israel in 1948. Despite appeals by Israel to stay out of the Six-Day War, Jordanian forces had attacked Israeli cities, including sites in Jerusalem, leaving Israel no choice but to fight back. I remember that day vividly.

Here in the U.S., my seventh-grade classmates and I were allowed to bring small radios to class so that we could listen to the news from Israel. We cried through morning prayers. We feared for the safety of Israel’s leaders, of family and friends who lived there, and mostly of the brave soldiers. We never dreamed that our prayers would be answered by a seemingly miraculous reunification of Jerusalem. As we listened to the news reports, we looked at each other with an increasing sense of ecstatic but cautious disbelief.

In recent years, Yom Yerushalayim / Jerusalem Day, which falls on May 22, 2020, has become a day of celebration like no other, filled with joyful prayers, parades and parties. But not in this year of coronavirus. The usually congested streets and throngs of people will be missing, evoking a quiet Jerusalem of long ago. The Old City may look much as it is depicted in the early 20th-century painting by Ludwig Blum, Panorama of Jerusalem (ca. 1920s-1940s, oil on canvas; The Joseph and Rebecca Meyerhoff Collection, Yeshiva University Museum). 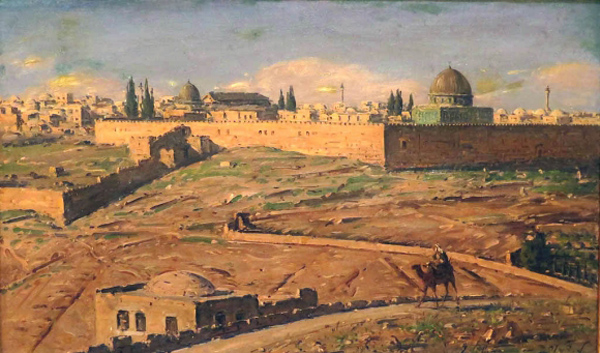 Blum (1891-1974) settled in Jerusalem in 1923, becoming a specialist in depicting vistas of the city in a naturalistic style that was becoming less popular among the artists that were emerging from Israel’s Bezalel School. Blum was known in particular for his ability to capture Jerusalem’s unique light. Many of his Jerusalem landscapes, including this one, are painted from the vantage point of the Mount of Olives. One can almost imagine how he felt sitting there, looking out at the magnificent view. In many of his works, he includes an animal or two—here, we see a camel on the road in the foreground—as a means to engage the viewer a bit more closely with the scene.

This year, my own family had planned an especially joyous and festive Yom Yerushalayim. My oldest grandson, Sam, an Israeli seventh grader, will become a Bar Mitzvah on that very date, almost six years after arriving on aliyah. The following day, on Shabbat, he will read aloud from Parshat Bamidbar. The pandemic means we won’t be celebrating the occasion in person; it will be a quiet day for us, his family in the U.S. We dreamed of a speedy end to the current crisis and travel restrictions, but in vain.

My dear Sam, as I look at Ludwig Blum’s painting, I can imagine riding that camel the short mile or so to reach your home in Jerusalem. And on this Yom Yerushalayim, we will pray for peace, and for the health of our entire family, and of Israel’s soldiers and first responders. And, yes, for a wonderful celebration to come—like no other!