To novelist Dara Horn, author of A Guide for the Perplexed, Jerusalem is both a physical place with GPS coordinates and an emotional space that maps on to personal dreams and desires, a theme she articulated in her lecture on Wednesday, June 7, “Jerusalem, Imagination and Historical Consciousness,” delivered as part of Yeshiva University Museum’s current exhibition in collaboration with the Center for Israel Studies, City of Gold, Bronze and Light: Jerusalem between Word and Image. 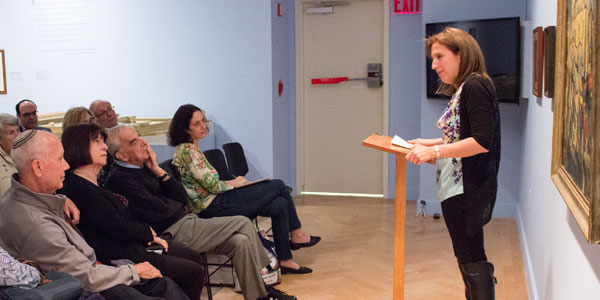 Over the centuries, Horn observed, Jerusalem has been a template for many artists to frame and contain their obsessive searches for meaning and purpose in life, which she found to be true of her own life as a writer.

Horn’s initial impulse to become a writer came out of being “haunted as a child by a terrifying sense of how fleeting time is.” Even though she has lived a life relatively free of pain and trauma, she learned growing up in the Jewish tradition that leading a charmed life does not immunize a person against the fires of Jerusalem, which are always waiting to ignite the soul. “That fire is in the daily Jewish ritual, the prayers, the songs, the glass you break under the wedding canopy, the grace after meals—you don’t have to be consumed by the fire for that ancient recurring cycle to hold your imagination in its grip.”

The haunting fear of entropy was counterbalanced for Horn by the comforts of literature, which for her became both a form of time travel and what she sees as an emotional archaeology. The book that triggered those feelings most powerfully was Mr. Mani by Abraham B. Yehoshua, a six-generation family saga in which Jerusalem figures prominently in every physical and metaphoric way. “That book,” Horn said, “brought alive the time travel that is Jerusalem.”

The fear of entropy and attraction to time travel combined to create in Horn an obsession with “writing and Judaism because they both seemed to me to be explicitly designed to solve the problem of being simply unable to bear the idea of days and cities that disappear. To me, the act of writing and the recurrent rituals of Jewish life seem to be have been invented to rescue those disappearing days, to give people the power to retrieve them or, as Jeremiah put it after witnessing the destruction of the Temple, to renew our days as a whole. In other words, Jerusalem.” 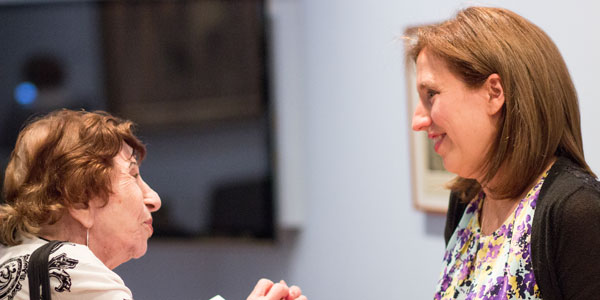 Horn said that writing is a kind of excavation, an archaeology, or digging down, into the soul, and that in Jerusalem, built on layers of  civilization and layers of destruction, this digging down means traveling through time by traveling through rock or, as the Yiddish poet Abraham Sutzkever said, “looking into mirrors of stone.” Every person has his or her own layers of destruction with deeper and more labyrinthine tunnels underneath, over which they come to be themselves.

In the end, Horn concluded, you don’t need to live in Jerusalem to be a Jerusalem writer, if Jerusalem means not only traveling through the actual city, but also the artistic process of excavation through destruction, recouping lost time, giving thanks for everything that preceded one’s soul and the fire that cleanses, like the ember that the angel dragged across Isaiah’s lips to sear him into prophecy.

In thanking Horn, Jacob Wisse, director of the Yeshiva University Museum, noted that the writer’s description of Jerusalem echoes the themes of the exhibition, which “manifests the tension between the Jerusalem of the here, the present, the physical Jerusalem; as well as Yerushalayim lemala u Yerushalayim lemata, Yerushalayim up and down, of heaven and earth. This is one of the tensions reflected in the exhibition and in much of the imagery and writing on Jerusalem—between the ethereal, ideal Jerusalem and the city actually lived in and in physical form.”

City of Gold, Bronze and Light: Jerusalem between Word and Image runs through July 30, 2017.