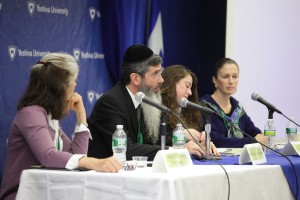 The more than 50 members of the MES were mentored by Rabbi Edward Reichman, M.D. ’86YC, ’90E, ’97R, associate professor of emergency medicine and associate professor in the Division of Education and Bioethics at YU’s Albert Einstein College of Medicine. Highlighting the importance of mental health, Reichman pointed to the tradition in Jewish prayer to ask for refuat hanefesh [health of the soul] before refuat haguf [health of the body], a hierarchy backed up by medical research.

Adiel Munk, co-president of the MES along with Jennie Kraut, said that he hopes the conference will “fill a need in the community for locally and globally understanding the relationship between medical ethics and Halacha, especially in breaking the silence surrounding some mental health topics.” Kraut added that they were “very excited to be holding an event like none [she] had ever seen before, that covers these issues from the combined perspectives of medicine, ethics and Halacha.”

A session on alcohol and substance abuse included noted author Rabbi Dr. Abraham Twerski, founder and medical director emeritus of Gateway Rehabilitation Center.  Speaking to the complexities of dealing with those issues in the Orthodox world, Twerski said, “In order to give a Halachic decision, one must know the details of Halacha and the facts of alcohol and drugs.  Without both, one cannot be considered well-informed.”

Rabbinic authorities included Rabbi Yona Reiss, The Max and Marion Grill dean of RIETS; Rabbi Mordechai Willig, rosh yeshiva [professor of Talmud] and the Sol Roth professor of Talmud and contemporary Halacha at RIETS; and Rabbi Herschel Schachter, the Nathan and Vivian Fink Distinguished Professor of Talmud at RIETS and head of its Marcos and Adina Katz Kollel.

Rabbi Kenneth Brander, The David Mitzner Dean of CJF, a supporter of the program and mentor to the MES organizers, noted that the conference, “by combining cutting-edge medicine with Halacha to focus on important issues of mental health, celebrated the uniqueness of Yeshiva University in its ability to convene its faculty of both scientific experts and Torah scholars to discuss contemporary issues.”