On Tuesday, July 6, and Wednesday, July 7, Rabbi Elie Abadie, M.D., the Senior Rabbi of the United Arab Emirates (UAE), spoke about  “Jewish life in the New Arab Word: A New Chapter?” in both English (July 6) and Spanish (July 7), focusing on the emerging Jewish community in the UAE.

The event was hosted by the Rabbi Arthur Schneier Program for International Affairs along with several international partners: the Institute for Jewish Experience at the American Sephardi Federation (ASF) and two Latin American Partners—the Majón Torá veDa’at Monte Sinaí of Mexico City and FeSeLa, the Sephardic Federation of Latin America.

Rabbi Abadie shared his personal odyssey from Syria to Lebanon to Mexico City and New York (where he studied at YU) and his return to the Arab world as the Senior Rabbi of the UAE. (At YU, he attended Yeshiva College as well as the Bernard Revel Graduate School of Jewish Studies and the Rabbi Isaac Elchanan Theological Seminary.)

Rabbi Abadie used his own story to reflect on the momentous changes in the Arab world and the possibilities for greater mutual understanding. He described his hope that in the return to the Arab world there might be a chance for Jews and Muslims—and all people—to tap into some of the creativity and synergistic dynamism that was the hallmark of Jewish life in the Islamic world for most of Jewish history.

Both lectures covered common ground, but through the magic of language, the same ideas can be transformed as they are spoken in a new form, and in actuality each talk opened up new conversations and highlighted different areas of interest and concern.

The audience for both talks came from across the globe, including Dubai, Armenia, France, England, Israel, Holland, the United States, Mexico, Venezuela, Argentina and Panama, to name a few. Many of the Spanish speakers had direct experiences of once living in the Arab world, and this perspective enriched the conversation. People were cautiously hopeful that this indeed will be a new and positive chapter in Muslim-Jewish relations and pave the way for greater respect and cooperation and the promise of a world where the dignity of all people can shine. 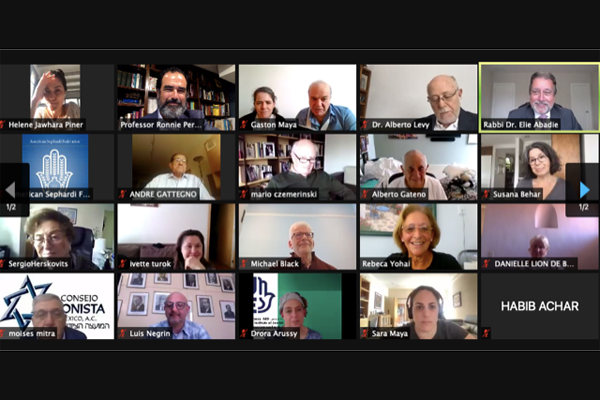 “We are so happy to have collaborated on this important event with our partners in Latin America and the ASF,” said Dr. Ronnie Perelis, the Chief Rabbi Dr. Isaac Abraham and Yelena Rachel Chair of Sephardic Studies, who gave the introduction to both talks. “There are people all over the world that are looking to YU to provide a forum for unique perspectives on Jewish life in our complex and changing world. To have hosted Rabbi Abadie—a proud alum of YU—was a distinct pleasure. We look forward to continuing these international partnerships and deepening these important conversations.”