For the first time, Stern College for Women students are using the art of documentary filmmaking to preserve the testimony of Holocaust survivors for future generations in a course titled, “Names, Not Numbers ©.”

Created by Tova Rosenberg, director of Hebrew language studies and Israel exchange programs at the Yeshiva University High Schools, “Names, Not Numbers” has been connecting teams of high school students to Holocaust survivors for the last 14 years with the goal of producing a documentary about their lives. Through rigorous training in historical research, interview techniques and video production, the student teams, with the help of professional videographer Michael Puro ’00YC, create a polished 20-minute video culled from hours of raw footage. The teams’ segments are then compiled into a two-hour movie presented at a special ceremony to the survivors and their families as well as to the general public.

Last year, Rabbi Yosef Kalinsky, associate dean of the undergraduate Torah studies program, worked with Rosenberg to adapt the high school program for students in the Isaac Breuer College of Hebraic Studies. This year, with the assistance of Dr. Karen Bacon, The Mordecai D. Katz and Dr. Monique C. Katz Dean of the Undergraduate Faculty of Arts and Sciences, and Ethel Orlian, associate dean of Stern College, “Names, Not Numbers” is being offered on the Israel Henry Beren Campus as a course taught by Dr. Mordecai Paldiel, adjunct professor in Jewish history.

On Tuesday, February 20, students had the opportunity to meet Sarah Botstein and Lynn Novick, well-known documentary filmmakers who have worked closely with the renowned Ken Burns.

Botstein and Novick had come to talk to the students about conducting an effective interview. They began by showing two examples from Burns’ most recent work, Vietnam, using the clips to comment on how much work was involved not only in the interviews themselves (one of which took an entire day) but also in mastering the details of the interviewees’ life-stories as well as all the history that surrounded the veterans while they were in country.

They then opened the floor for questions, and their answers comprised an excellent primer on how to conduct interviews with people who have experienced catastrophes in their lives. First and foremost is establishing trust, and that can be done in many ways. Novick began by saying that the interviewees “have a right to know who are—they’re going to tell you everything, so you need to tell them something about yourself, why you’re doing this, your connection to their lives.” Botstein addied that “it’s important for them to know the privilege you feel in meeting them and hearing their stories.” 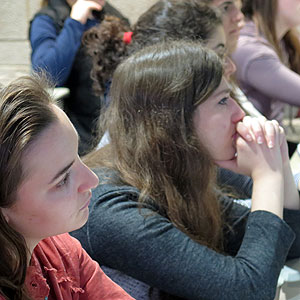 Both agreed there is no substitute for “doing lots of homework—you need to be fully prepped. The more you study the background of the person you’re interviewing as well becoming familiar with the subject matter that is their life, the better you will be able to convince them you know what you’re doing. If they you know you’ve done your homework, they can relax because they know they don’t need to explain everything.”

The two producers also spoke at length about how to conduct the interview itself. Having prepared questions is important, but the list is only the starting point. It is also acceptable to correct them, gently, if something they say is not accurate. “Memory is fallible,” said Botstein, “and it’s okay to say, ‘Wasn’t that on such and such a date?’ Know that they want to the story to be accurate as well.” Novick added a caution: “If they are holding onto something really strongly, even if it’s wrong, then you just have to let it go.”

Both agreed that an interviewer never says “I know you how feel.” Instead, interviewers should ask their subject not only to describe how what they’re saying feels to them personally but also if they can explain their emotions in a way that conveys to the audience what they are feeling inside. This led to several questions about what to do if an interviewee becomes upset. “If it looks like they will be able to recover, then give them the time do so,” said Novick. “Reach out and touch them, and don’t back away from letting them know that you’ll wait as long as it takes.” Both stated that breakdowns on camera are never included in the finished product.

Always end with an offer to them to add anything that might not have been covered or that they remembered as they spoke, and always engage in the whole interview process, as Novick described it, with “gratitude, respect and compassion.”

“Names, Not Numbers” is generously supported by a prominent national foundation, and all 150 documentary films it has produced have been accepted into the archives of the Jewish National and University Library of Israel at the Hebrew University of Jerusalem.  In addition, they are being archived at Yad Vashem and the Gottesman Library at YU.

“Names, Not Numbers: A Movie in the Making at Stern College for Women” is tentatively scheduled to be released on May 7, 2018.