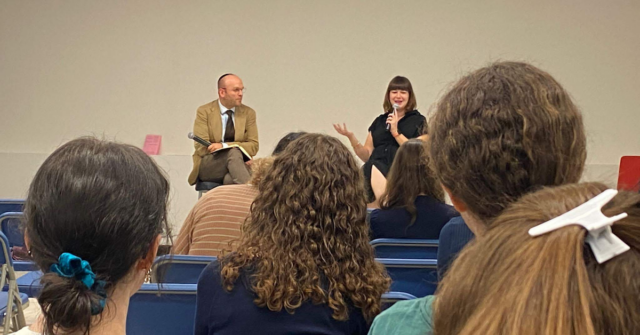 On Wednesday, Sep. 14, 2022, the Zahava and Moshael Straus Center for Torah and Western Thought and S. Daniel Abraham Honors Program hosted Lahav Harkov in conversation with Straus Center Associate Director Dr. Neil Rogachevsky. Harkov, the senior contributing editor and diplomatic correspondent of the Jerusalem Post, has had a front-row seat to Israeli politics, serving as a Knesset reporter for eight years and reporting on numerous monumental political events.

Dr. Rogachevsky opened with some current news, the United Arab Emirates foreign minister’s first official visit to Israel, which marked the two-year anniversary of the Abraham Accords. Harkov was on the first official flight from Israel to the UAE, together with members of Trump’s staff, including Jared Kushner and senior Israeli officials who came to work out the logistics of bringing the two countries together. As a journalist, Harkov was given a tour of the country to see what it had to offer, including museum tours and kosher meals. Harkov expressed optimism for the Abraham Accords, given Middle Eastern countries’ common threat of Iran becoming a nuclear power. Additionally, she noted that the Arab countries appreciate and relate to Israel’s rootedness and history with their land.

Harkov then addressed the Iran Deal. “In Israel, among government officials and defense officials, there’s a near consensus opposing the Iran Deal. When you hear about differences of opinion, there’s like two people,” she said. “Because they’re different and interesting, you hear a lot more about them in the media that is not so reflective of the proportions.”

Dr. Rogachevsky then shifted the conversation to Harkov’s life and career. She grew up in New Jersey and made aliyah in high school. She loved Israel and journalism at a young age. Her mother was Israeli and many people in her mother’s family were journalists. She became passionate about the intersection between Israel and journalism during the Second Intifada when she witnessed the unfair treatment of Israel in American media. “I just said I want to be someone who’s going to be there and tell that story and tell it in a way that’s fair and accurate,” she said.

Harkov began working for the Jerusalem Post during college. She was promoted to the Knesset beat when the former reporter left following maternity leave. “The good thing about Israel is that people are so informal. […] You could just go up to Bibi in the hallway and ask him a question,” Harkov said, reflecting on her time reporting in the Knesset. However, her American manners served her well. “I think that when you are a polite and respectful person in Israel, it stands out, and people appreciate it.”

Asked about advice for students in today’s fast-changing media landscape, Harkov emphasized the importance of the diversity of options in reporting that are now available. Particularly for people who don’t have a platform like she does, it’s great to be able to use podcasts or Substack to get your voice out there. She started using Twitter early in her career and today has over 106,000 followers.

After a student question and answer session, Dr. Rogachevsky closed off by asking how the original chalutzim would view Israel today. “I’m very optimistic about Israel,” Harkov said. “I think we’re more than a little bit lost these last few years politically, and that’s unfortunate, but I don’t think it means our democracy is in danger. I think it means it needs some renovations to our system.”