Nearly 40 members of the YU community tuned in on Sunday, Feb. 21, 2021, to hear Rayhan Asat, lawyer and Uighur activist, speak about her ongoing fight to free her brother, Ekpar Asat, from his 15-year sentence in one of China’s forced labor camps. The Chinese government has been accused of perpetrating a genocide against its Uighur Muslims, over one million of whom have been detained in concentration camps since 2017 in the Xinjiang region. As of this date, the United States and the Canadian parliament, among other international leaders and countries, have labeled China’s abuse of Uighurs as genocide. 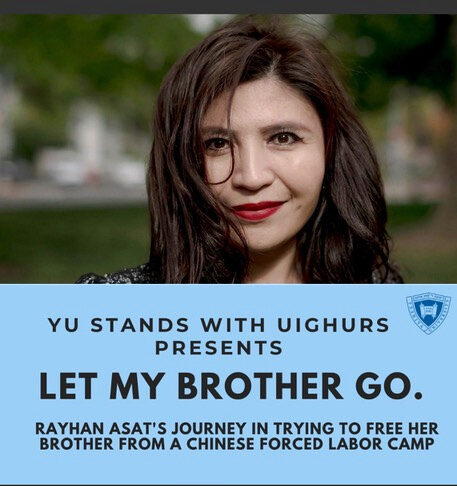 Ekpar was a Uighur entrepreneur and philanthropist living in China, and in 2016, he was accepted into the U.S. State Department’s three-week leadership program, the International Visitor Leadership Program. When Ekpar returned to China after the conclusion of the program, Rayhan suddenly stopped hearing from him, and soon after, her parents told her that they could no longer attend her graduation ceremony at Harvard Law School. “He was nowhere to be found,” Rayhan reflected, referring to the disappearance of her brother. “Not only is his freedom being taken away, so is his dignity … I can’t imagine what he is going through.”

During her talk and PowerPoint presentation, Rayhan was Zoom-bombed on numerous occasions. Rather than silencing her, the interruptions drove her to directly address the intruders. “I am presenting evidence,” she told them,  referring to the Uighur genocide, “and you are here to hurt me even more.”

Throughout her speech, Rayhan showed pictures of Ekpar before he was sent to China’s concentration camps. “My advocacy is truly driven by my love for my brother,” declared Rayhan. “Not having him by my side and just talking to him every day—it’s been really difficult.”

Rayhan ended her talk urging students to speak out against what is happening to the Uighurs in China. “This is not a ‘sensitive issue’,” Rayhan said. “If we say the Uighur crisis is a ‘sensitive issue,’ we’re saying that human rights are a sensitive issue … We should not allow China to dictate how we should speak or not speak.”

“Hearing about the Uighurs’ crisis from such a personal perspective really helped me to understand the severity of what is going on in China right now in a new light,” said Neeli Fagan ’21S, a current student at Stern College for Women. “As a granddaughter of Holocaust survivors, I grew up hearing stories of experiences very similar to what Rayhan was describing. It really shocked and horrified me that not even 100 years later, people are doing something so similar to the Holocaust,” she added.

This was the second event in a series organized by YU Stands with Uighurs, a student-led group. The first, which took place back in October 2020, garnered over 80 participants and featured Uighur activist and refugee Tahir Imin as well as Rabbi Yosef Blau, Senior Mashgiach Ruchani at the Rabbi Isaac Elchanan Theological Seminary.

YU Stands With Uighurs was founded in September 2020 and aims to educate the wider YU community on China’s human rights abuses against Uighurs. Over 200 YU students and alumni have joined the YU Stands With Uighurs WhatsApp group, in which articles and developments about the Uighur genocide are shared every week.

“In spite of the Zoom-bombing and other unfortunate disruptions that took place during the event, those that attended and took the time to listen to Rayhan’s story know that this issue is not one that will be silenced,” YU Stands With Uighurs said in a statement following the event. “While the road toward meaningful progress in ending the Uighur genocide is not an easy one, remaining optimistic, united and active will send a louder and more effective message to those in our communities and around the world.”

Sruli Fruchter and Elisheva Kohn are the founders of YU Stands With Uighurs. They can be reached by emailing ifruchte@mail.yu.edu and ekohn1@mail.yu.edu, respectively.