The Lost Promise: American Universities in the 1960s 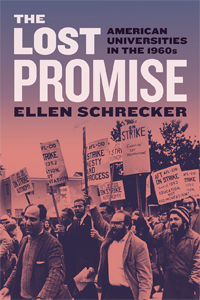 On Monday, Dec. 13, renowned historian Dr. Ellen Schrecker, Professor Emerita at Yeshiva University, discussed her most recent book, The Lost Promise: American Universities in the 1960s (University of Chicago Press), with Dr. Paula Geyh, associate professor of English at Yeshiva College. The event was cosponsored by the YU Libraries, the Robert M. Beren Department of History, and the Yeshiva College English Department. The audience for the talk was both gathered in the library and included participants on Zoom.

The discussion revolved around a set of questions pertaining to the expansion of higher education during that pivotal decade. How did universities cope with the sudden and unprecedented rise in student enrollments across the country? How did the protest movements of the 1960s such as the civil rights and antiwar movements affect the culture on campuses? What contributions did students make to those movements? How did university administrations and faculty react to the explosion of student activism? And what were the long-term legacies of that activism for the future development of universities in the US?

Dr. Schrecker argued that while antiwar protests on campuses may have contributed to turning public opinion against both the Vietnam War and the military draft, the image of “out-of-control and crazy” student protesters, fabricated by unsympathetic public intellectuals such as Seymour Martin Lipset and eagerly spread by the mainstream corporate media, did serious long-term damage to public support for universities.

The resulting backlash set the stage for the election of Ronald Reagan as governor of California, decades of disinvestment in public education, and the creation of a kind of shadow university system in the form of libertarian think tanks financed by right-wing billionaires such as Charles and David Koch. The ideal of universities as civic institutions dedicated to promoting the common good seems to have been lost.