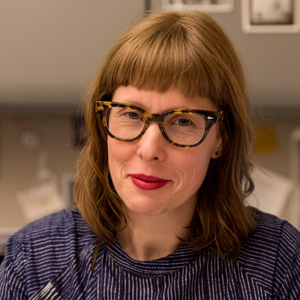 Last year, Liesl Schwabe, director of the writing program at Yeshiva College, was awarded a Fulbright-Nehru Academic and Professional Excellence Fellowship, a seven-month grant that supported her as she taught several writing classes and conducted research at Presidency University in Kolkata, India.

Now back in the United States, Schwabe gave a lively account of her journey in India on Wednesday, Dec. 11, 2019, to the students of the Jay and Jeanie Schottenstein Honors Program (Dr. Daniel Rynhold, director) along with a number of her colleagues, recounting through colorful photographs and exuberant language the teaching and research she did in the third-most populous metropolitan area in India, described by Lonely Planet as “a daily festival of human existence, simultaneously noble and squalid, cultured and desperate, decidedly futuristic while splendid in decay.” 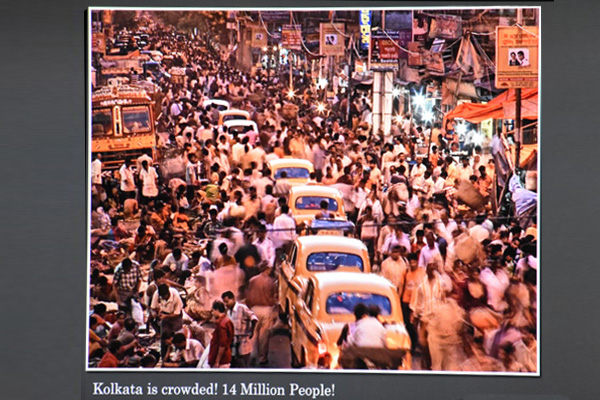 Her tenure at Presidency College put her at the heart of the first modern university in Asia, founded in 1817 by a group of what its website calls “enlightened Indians and Englishmen” and becoming over the next two centuries Bengal’s pre-eminent center of higher learning. (Dr. Sumanta Goswami, associate professor and chair of the biology department, is a Presidency alumnus.)

She covered a great deal of cultural ground during her hour-long presentation. She touched upon the effects of British colonial rule and described the trauma of partition in 1947 when British India was divided into two independent dominion states, the Union of India and the Dominion of Pakistan. She illustrated what she called the Bengali Renaissance with lively portraits of people like Raja Ram Mohan Roy (1722-1833) and Henry Louis Vivian Derozio (1809-1831), who brought revolutionary ideas to the Indian subcontinent. She described how Rabindranath Tagore (1861-1941), who won the Nobel Prize for Literature in 1913, is revered by people as the authentic voice of their feelings, hopes and dreams. 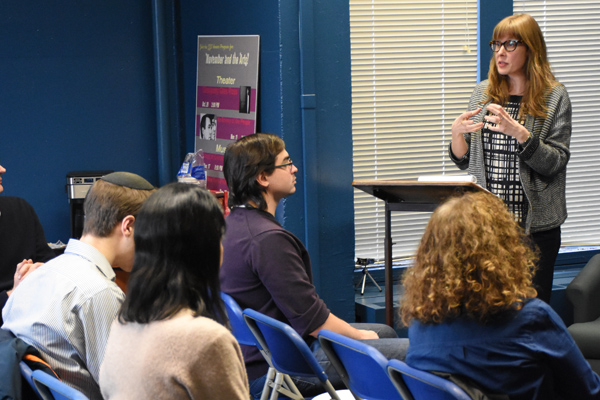 While there, she worked on several writing projects, one of which describes the International Kolkata Book Fair for the Los Angeles Review of Books. Founded in 1976, the boimela, as it’s known in Bengali, spans 12 days and had, in 2018, over 2.2 million visitors. “The Kolkata book fair is the largest in the world [and] it celebrates not just books but also the everyday people who read them.”

On a more serious note, she wrote “In India, One Publisher’s High-Stakes Fight for a Caste-Free Society” for Literary Hub, about the publishing house Navayana, which came into prominence in 2014 when it published an annotated edition of Annihilation of Caste, Bhimrao Ambedkar’s searing 1936 indictment of the entire Hindu faith. “Navayana is engaging with the most divisive topics in India today,” said Schwabe, “looking to foster dialogue and understanding against an often-violent backdrop,” much of which is generated by the entrenched caste system in India. It’s important to note, she said, that The Committee to Protect Journalists named India in 2017 the 12th most dangerous country in the world for writers, with the climate of violence persisting to this day under the administration of Prime Minister Narendra Modi.

Another story idea she’s working on is the tradition of marching brass bands, which are all Muslim but play throughout the predominantly Hindu country at weddings and baptismal immersions. 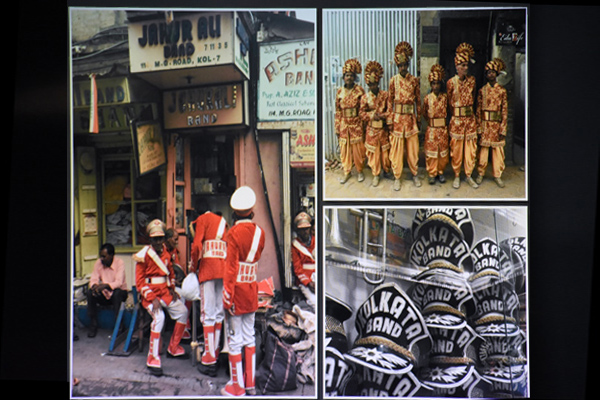 In her writing workshop, she worked with students who, while smart and diligent, had not been encouraged to write in the first-person and share what they wrote, so that is how she structured her classes. The students in her class had moved as a cohort throughout their school career, but when they wrote about themselves and shared their work, they learned much about themselves and one another that they had never known before, despite the number of years they had moved through the system together.

In addition, they had been accustomed to a more passive lecture-style of teaching “whereas I’m all about, ‘So, what do you think? There were some moments where they were waiting for the lecture, and I’m waiting to hear what they think. We worked it out,” she said with a laugh. “It’s such an exciting moment in the world for personal narrative,” she pointed out, “that it meant a lot to have this opportunity to be involved in something where people got to read and write more to learn about one another.”