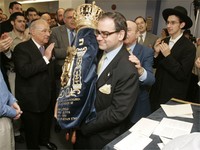 Jun 20, 2006 — Students at Yeshiva College and Sy Syms School of Business on Yeshiva University’s Wilf Campus in Washington Heights are the beneficiaries of a new Sefer Torah presented by the Lipman family of New York and Memphis, TN.

The inscribing of the Sefer Torah for YU was commissioned by businessman and philanthropist Ira A. Lipman of New York and given in observance of the yahrzeit (anniversary of the passing) of his late father, Mark Lipman.

Siyum (completion) and dedication ceremonies for the Sefer Torah were held in the Lipschutz-Gutwirth Study Hall of Leah and Joseph Rubin Residence Hall. Renowned Cantor Joseph Malovany, Distinguished Professor of Liturgical Music at YU’s Philip and Sarah Belz School of Jewish Music and Cantor of Fifth Avenue Synagogue, led the audience in passages of Psalms to mark the occasion.

The consecration of a Sefer Torah is traditionally celebrated as if it were a bride. Mr. Lipman’s sons, Gustave, Joshua, and Benjamin, carried the Torah under a chuppah (canopy) held aloft by YU students to its new home in the Lipschutz-Gutwirth Study Hall. Students and faculty members joined the Lipman family in the procession from Morris and Celia Morgenstern Residence Hall and sang traditional songs as they marched.

The honor of assisting Rabbi Binyomin Spiro of Baltimore, the sofer (scribe) who prepared the Sefer Torah, in completing its lettering was given to YU students, faculty and administrators, followed by members and close friends of the Lipman family. After the final letters were completed by President Joel and Ira Lipman, Mr. Lipman and his sons carried the Torah in a seven-circuit procession as Cantor Malovany led those assembled in song.

In his remarks, President Joel acknowledged the Lipman family’s extraordinary commitment to the perpetuation and flourishing of Jewish religious life, especially on university and college campuses. The family has given Sifrei Torah, also completed on previous yahrzeits of Mark Lipman, to the Hillel chapters of the University of Pennsylvania, Northeastern University, Columbia University, Ohio State University, the University of Michigan and the University of Maryland; as well as to Fifth Avenue Synagogue; the Simon Wiesenthal Center, Los Angeles; the Center for Jewish History, New York; Baron Hirsch Congregation; and Congregation Agudath Achim.

Ira A. Lipman is founder and chairman of Guardsmark, LLC, one of the world’s largest security services companies, with more than 155 offices in the United States, Canada, Puerto Rico, the United Kingdom, and France, serving clients in over 400 cities. His father, the late Mark Lipman, founded and operated Mark Lipman Service, a private investigations company in Little Rock and Memphis, and was a prominent leader of the Jewish community for many years, including having been president of Congregation Agudath Achim and the moving force to build a new synagogue that was completed in 1952 in Little Rock.