The Yeshiva University men’s tennis team’s historical streak continues, as the top-seeded  captured its fourth straight Skyline Conference tournament championship by knocking off #2 Purchase College, 5-2, at the Binghamton Racquet Club on Sunday afternoon. Yeshiva now earns an automatic bid into the NCAA Division III tournament, which will take place May 11-14. 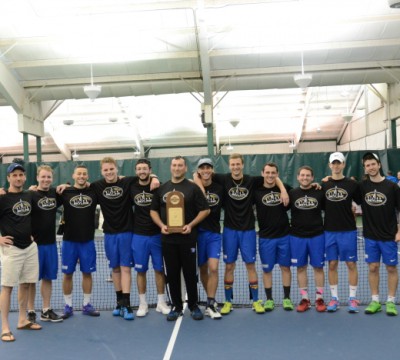 Senior David Papis Elon was named the Most Outstanding Player of the Skyline Conference championships.

Yeshiva (15-1) won two out of three doubles matches and was victorious in three of the four completed singles flights to clinch the conference title.

“I am really proud of our team,” Yeshiva University head coach Jon Rubinstein said. “The guys really came to play today. There was a lot of pressure to keep the streak going and they came out firing.”

Papis Elon and sophomore Mikey Ozery kicked the match off with a dominating win at #2 doubles, 8-0. Senior Eitan Rudansky and classmate Adam Wannon continued Yeshiva’s momentum by claiming their #3 doubles flight, 8-4. Purchase (11-2) narrowly defeated YU in first doubles, 9-8, to get on the board.

Freshman Lior Brik tilted momentum back into the Macs’ favor by winning both sets at #4 singles in dominating fashion, 6-0, 6-0. The Panthers won the third singles position to narrow the Maccabees’ lead to 3-2.

Sophomore Adam Rosemblaum put Yeshiva on the cusp of victory, by winning at #2 singles, 6-3, 6-2. Junior Charlie Friedman was victorious at #5 singles, 6-1, 6-4, to clinch the Maccabees’ fourth consecutive Skyline Conference championship and automatic bid into the NCAA tournament.

“We are really excited to compete against national competition at the NCAA’s this coming week,” Rubinstein said.

The Maccabees will now wait until Monday to see who they will face and where, as the NCAA Division III men’s tennis selection committee will announce the bracket at 12:00 p.m. on NCAA.com. The first round of the NCAA tournament is scheduled to begin on Thursday afternoon. Visit www.yumacs.com for the latest YU Athletics news and scores.