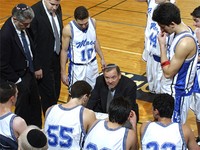 The Yeshiva Maccabees, after a poor offensive performance in the first half of their home opener against the Stevens Institute of Technology Ducks, outscored their opponent 45-14 in the 2nd half, en route to a 65-43 victory at the Max Stern Athletic Center. Yeshiva (2-1, 1-0 Skyline) earned its second straight win, overcoming a first half in which they shot 7 of 21 from the field, at one point going 10 full minutes without a field goal. They were led first by rookie Benji Golbert, who provided the offensive sparkplug in the second half, scoring 18, and then by senior Jackie Yulzary, who scored 18 of his game-high 23 points in the second half. Yeshiva Coach Jonathan Halpert, commenting on the discrepancy between the team’s performance in the two halves, noted, “When guys try to play one-on-on… you see the results. When they play together as a team, you see the results.”

Stevens Tech (1-3, 0-1 Skyline) capitalized on Yeshiva’s early mistakes, taking a 24-10 lead midway through the first half. The Ducks were led early by their speedy guard, Garrick Todechine, and their in! side force, Dan Jordan, both of whom finished the game with 10 points. The Macs made a run late in the first half, cutting the lead to six, but Stevens Tech guard Jimmy Dominkewicz was fouled as he shot a desperation 3-pointer at the buzzer, and converted all three free throws, giving the Ducks a 9-point halftime lead.

The second half, however, belonged to the Macs. They shot 15 of 24 from the field, including 6 of 8 from three-point range. Golbert got them going early, scoring the first 7 points of the half, and Yulzary tied the game with a baseline jumper. After both sides traded 3-pointers, Yulzary gave the Macs the lead for good on a controversial basket; Yulzary unquestionably releasing the ball after the 35-second shot clock expired. Golbert then put the Macs in command midway through the half with a 4-point play, extending Yeshiva’s lead to 9.

Coach Halpert was pleased with the results, but he was not thrilled with the overall performance. “It was a disappointing win,” he said. “Don’t look at the score. Look how we played together as a team. We really haven’t found a rhythm, we’re not in sync with each other, everyone’s half a step off. Clearly there’s a lot of talent here — the question is will we come together soon enough to execute that talent.”

NOTES: Alex Lapidus had a successful homecoming, scoring 16 points in his first home game in 21 months. Lapidus missed all of last season with a knee injury… Stevens Tech was 10 of 10 from the free throw line in the first half, but did not have any free throw attempts in the second half… Yulzary recorded seven steals… The Macs return to the court Wednesday night, December 3rd, with an 8:00 game against the Manhattanville Valiants at the Max Stern Athletic Center. The game can be heard at www.macslive.com; pre-game coverage begins at 7:40.

MacsLive! is a service of the undergraduate student body of Yeshiva University