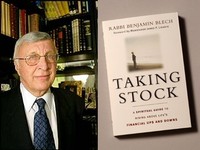 Dec 7, 2003 — You’ve heard this all before, maybe even lived it: Man buys Internet stock. Stock soars. Man buys many more shares. Man becomes a paper multimillionaire, looks in the mirror, sees an infallible genius smiling back. A year later, man is wiped out, grappling with debt and deep depression, and now he sees an idiot every time he shaves.

It was a tale oft told after the Nasdaq implosion of 2000 wreaked its equal opportunity havoc on geniuses and imbeciles alike. Still, it wasn’t supposed to be told by 10th-generation Orthodox Jewish Torah scholars, who almost by definition are supposed to put material losses far below spiritual gains on the ladder of emotional importance.

“My wife would ask why I called my broker 20 times a day, and I’d say, ‘I need to know what I’m worth,’ ” Rabbi Benjamin Blech, the protagonist in this version of the riches-to-rags tale, said during a recent soul-baring lunch at Le Marais, a kosher steak house in Midtown Manhattan. “Well, even a rabbi can confuse self-worth with net worth.”

Small wonder. In a few short years, Rabbi Blech, 70, turned a relatively small nest egg of around $50,000 into $7 million and then into nothing – ashes to ashes, dust to dust, in the blink of a financial eye. The trusts he was setting up for Yeshiva University and for his four children and nine grandchildren were all gone. O.K., he hadn’t put the house in danger, his pensions were intact, he still had a professor’s salary from Yeshiva University, “and if I needed money I could always preside over another funeral,” he said. But his ego was shattered and he was embarrassed to look his wife in the eye.

“Don’t anyone tell me that money means nothing – it means a lot,” he said. “And the pain of losing it exceeds by 10 times the joys of making it.”

It took him the better part of a year to claw his way out of the black hole of depression that had engulfed him – and to this day, he is loath to utter the name of the stock that did him in, calling it simply his “Titanic.” But finally, poorer in money but richer in wisdom, Rabbi Blech went back to doing what a rabbi is supposed to do best: guide his flock through spiritual travails. And, since he no longer has a congregation – he retired 10 years ago from Young Israel of Oceanside on Long Island – the best way to do that seemed to be to write a book.

The result, “Taking Stock: A Spiritual Guide to Rising Above Life’s Financial Ups and Downs” (Amacom), which was published in October, is chock-full of anecdotes and parables and quotes – some autobiographical, some biblical, some literary – that together form a blueprint for getting through the stages of grief.

With the book, Rabbi Blech is walking a minefield at worst, a tightrope at best. Self-help books always veer close to the edge of banality – it is pretty easy, after all, to tell depressed people not to blame themselves, to let themselves cry, to put their losses in perspective. And books by rabbis can be doubly suspect – atheists may consider them bogus; Christians may consider them nonapplicable; single people may bridle at the constant references to family.

In fact, Rabbi Blech briefly considered leaving his rabbinical title off the cover, then decided more was to be gained than lost by the religious affiliation. “The polls show that more than 90 percent of people do believe in God,” he said. “And remember, ‘god’ makes up three-quarters of the word ‘gold.’ ”

That last remark was said jokingly; the following was not: “Writing this book was a personal catharsis. I’m not just metaphorically saying, ‘I feel your pain’; I’m telling people, ‘A rabbi actually felt your pain – acted stupid about money, went into denial, went through all the things you went through.’ ”

Rabbi Blech has done his best to broaden the book’s appeal and reach. He conscripted an acquaintance, Monsignor James P. Lisante, to write the introduction – a not-so-subtle way to woo Christian readers.

Rabbi Blech quotes as readily from secular heroes as biblical ones: King David may have “melted away my couch with my tears,” but it was Elizabeth Taylor who, after a robbery in her home, said, “I don’t cry for things that don’t cry for me,” and it was the Beatles who noted that “all you need is love.”

Perhaps most important, he leavens the heavy philosophy with humor. There is no Chapter 11 in the book – a little bankruptcy joke. The chart that shows the sorry rise and fall of his holdings is titled “The Blech Stock: From Womb to Tomb.”

Not surprisingly, Rabbi Blech bristles at any suggestion that he is trotting out warmed-over psychological clichés.

“Maybe it’s pat to say memories are more important than money, but then you see the news accounts from San Diego, of people running into burning homes” during the wildfires in Southern California, he said. “They were running after photo albums, not safe deposit boxes.”

So, with that as fair warning – nothing here will be radically new, just put into a different perspective – here is some of Rabbi Blech’s hard-earned wisdom:

Yes, real men – and women – do cry, and yes, money is worth crying about. “The Hebrews used the same word for money and blood. The Bible says Abraham was blessed by riches. Money is security – how’s that for a warm, fuzzy word? – and losing it feels like failure.”

Rotten decisions are not indicative of terminal stupidity. After all, Henry Blodget, Mary Meeker and lots of highly praised and highly paid stock analysts guessed as wrong as you did. “Failing in the stock market doesn’t brand you an all-around failure,” Rabbi Blech said.

Forgive yourself. Lots of people got sucked in by greed. Rabbi Blech even remembers one of his son’s friends, an otherwise bright and seemingly responsible young man, whose plan was to quit his job, cash in his stocks and become a full-time ski bum. “Small wonder that God saw fit to send an economic flood,” Rabbi Blech said.

No malevolent stock market spirit foisted your poor buy-and-sell timing upon you. Passing the (lost) buck onto God or karma or voodoo dolls is a form of hubris. “The market doesn’t know you by name. It doesn’t make a stock go down the day after you, and only you, bought it.”

If you’ve lost a bundle, your neighbor probably did, too. Don’t believe all the folks who claim they bought Yahoo at $12, or sold it short at $540. “The stadium couldn’t have accommodated all the people who say they were there when Mark McGwire hit his 70th homer.”

If you fake optimism, it can become real in time. Exercising, hanging around with cheerful people, even using upbeat language, all can cheer you up mightily. “Don’t say you’re tired, say you need to change your batteries – it really makes a difference,” Rabbi Blech said.

Spend time with Rabbi Blech, and you quickly realize he practices what he preaches. His tale is woeful, but his eyes keep twinkling and his humor keeps flowing.

Take his description of himself: “My predecessors all had long beards. I’m first-generation clean shaven, so think of me as a lot like my father, but in camouflage.”

Or his reason for handing his remaining investments over to a money manager: “I can still be hit by a Mack truck, but at least I won’t be driving it.”

That ability to face adversity with humor did not miraculously appear after the stock market debacle.

Rabbi Blech was born in Switzerland and, like many European Jews of his age, saw his life turned upside down when Hitler came to power. When he was 8, his family fled to Borough Park, Brooklyn, where his father quickly became a prominent rabbi.

THERE was never any question that young Benjamin would follow suit. He went to Yeshiva University, and got the Oceanside job soon after graduation. His wife, Elaine, was his first girlfriend; they met when he was 21 and married when he was 23.

While his interest in Judaism was profound, it was not exclusive. He majored in English – “Rabbis write sermons and articles,” he explained – and minored in psychology. Then he got a master’s degree in social psychology. “It takes more than religious knowledge to deal with a congregation,” he said.

When he wasn’t in school or synagogue, he was hanging out by Ebbets Field. (“I was a crazy Dodgers fan, plain and simple,” he recalled.)

And he still loves to tell of the time that he and two friends talked their way into Ernest Hemingway’s house in Cuba. “Turns out, he’d always had a special interest in Judaism,” Rabbi Blech said.

From the first, Rabbi Blech comfortably juggled several career balls. He presided over Young Israel Oceanside for 37 years, and also taught at Yeshiva for most of those years.

He has written nine other books, some serious (“Understanding Judaism: The Basics of Deed and Creed”), some cabalistic (“Your Name is Your Blessing,” about the mystical meaning of Hebrew names) and some just plain playful (How else to describe “The Complete Idiot’s Guide to Learning Yiddish”?).

And there were audiences with the pope, appearances on Oprah, a chance to meet his teenage idol (Goody Rosen, a Jewish Dodger) and all kinds of honors and accolades.

It was a charmed life – and one that left him totally unprepared to cope with the Great Personal Depression of 2000. Now, with this latest book serving as personal catharsis – and, of course, potential money maker – he is back to his old contented self.