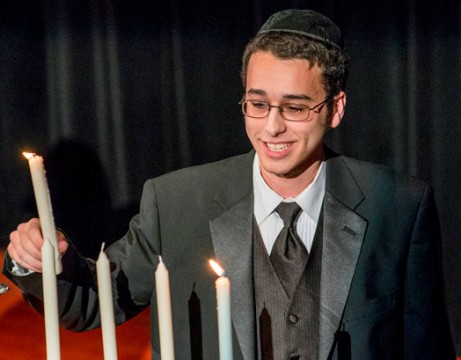 Former President George W. Bush served as the keynote speaker at Yeshiva University’s 90th Annual Hanukkah Dinner and Convocation, but the Point of Light ceremony—which honors outstanding students, faculty and alumni each year who best exemplify the values and spirit of Yeshiva University—might have been the highlight of the night most eagerly anticipated. Ike Sultan’14YC, ’17R, ’17A, was the youngest alum honored this year for his work creating Halachipedia, a website modeled off Wikipedia that seeks to share, distribute and make halacha [Jewish law] more accessible to any and every English speaker interested in Torah.

Sultan’s site receives more than 300 hits a day and has more than 3.5 million total visits so far. But lest you think he’s resting aimlessly on his laurels, Sultan also leads a Data Structures lab at Yeshiva College, teaches a weekly session at Yeshivat Noam’s middle school in Paramus, New Jersey, and participates in Camp Morasha’s Beit Medrash Program, all while pursuing a graduate degree at YU’s Azrieli Graduate School of Jewish Education and Administration and semicha [rabbinic ordination] at YU-affiliated Rabbi Isaac Elchanan Theological Seminary, where he is also a shuir [class] assistant to Rosh Yeshiva Rabbi Hershel Schachter.

These extraordinary achievements are typical of a Point of Light.

Sultan grew up in West Orange, New Jersey, where his family helped found and build the Sephardic minyan. “I was brought up in a family and a community that strongly valued chesed, Torah, Israel, and commitment to others,” said Sultan. “I decided to attend YU because of its incredible Jewish community and yeshiva atmosphere, the rabbis who model Torah, scholarship, and ethics, and, of course, the opportunity to pursue a degree from a great college.”

Sultan majored in Computer Science and minored in Mathematics. But his fondest memories from YU had to do with Torah learning. “On Friday nights, there were few people in the Beit Midrash and I had no later classes to get to as I did during the week,” he explained. “I could learn something outside of the fixed schedule of a seder and as late as I wanted. I also loved spending time at Rav Schachter’s house for Shabbos meals, Purim mesibahs and the like.”

In 2009, while celebrating Shavuos, Sultan was learning at home during the night as per yom tov tradition and idly commented to one of his brothers that if Wikipedia is able to do collect, organize, and present such a large amount of information on any given topic in such an accessible manner, then it must be possible to do the same with halacha.

“Torah is infinite in quality and quantity, but it has gotten easier for people to find the pertinent sources and information that they’re looking for with modern seforim that organize information,” explained Sultan. “Why not take it to the next level with the internet. It wasn’t a novel idea, but the hard part was actually making it happen.”

“Actually making it happen” entailed recruiting his brother Daniel to set up the software for the site and put it on the Internet. Sultan took over from there. That fall, in Sultan’s first year of studies at Shaalavim in Israel, he started writing on a few topics of halacha and put them online.

“It took a while before we started getting a significant amount of hits and took even longer to get volunteers to help contribute,” said Sultan, “but I knew it would be a work-in-progress. Today we have close to 500 pages and nearly 10,000 footnotes. And we’re just getting started!”

Sultan’s long-term plan for the site is to continue to grow the content by adding more topics and a more diverse array of halachic opinions from YU poskim (halachic authorities) and Sephardic and Ashkenazic poskim, as well as improve upon design features, such as adding a new editor interface, a transliteration feature for the search engine and a dynamic link for every source to see the text in full. Sultan also hopes to branch out to include other languages, and points to initial content that’s now offered in Spanish.

It’s a big task—but Sultan is gratified by the stream of positive feedback. “Whether it’s a quiet thank you, an e-mail from anywhere in the world or an esteemed honor like being a Point of Light at the YU Hanukkah Dinner, I’m appreciative of each and every word of praise,” he said. “I’ve also gotten positive feedback from my rabbis at YU. These things go a long way toward keeping me motivated to continue this project.”

Sultan, who has been a student in Rav Schachter’s shiur for four years and is in his second year of serving as a shiur assistant, is proud to credit Rav Schachter with being a genuine role model. “I’ve learned from Rav Schachter both professionally and personally. Professionally, I see how he deftly manages a very busy schedule entailing learning, teaching and deciding weighty halachic questions. Personally, I’ve learned from his tremendous level of patience, concern for his students, interesting stories, and his consistent passion for his learning and teaching.”

Sultan continued, “I’ve also been inspired by Rabbi Mordechai Willig (another YU Rosh Yeshiva), from whom I’ve learned a great deal and asked many halachic questions. He gives generously of his time and has agreed to review many of the Halachipedia articles.”

Sultan spoke of his YU experience before hundreds of friends and supporters of YU during the Point of Light ceremony moderated by President Richard M. Joel. “I was proud to be honored and appreciated that I might be able to inspire others about YU by telling my story and how YU has helped me on my journey. YU is a wonderful institution that really tends to the needs of all of its students, cares about making the campus experience complete with a yeshiva feel, and encourages the growth of budding scholars both in Torah and all of the sciences of the world.”

Sultan plans to pursue a career in Jewish education and utilize technology to make a positive impact on the lives of students, inspiring them to reach great heights in both the spiritual and academic realms.