In June, Yitzchak Shmalo ’16YC presented original research at a key international conference in the field of chaos theory, an area of mathematics that studies nonlinear topics that are effectively impossible to predict or control because of the complexity of the systems involved (for example, the weather or the stock market).  The conference, “Llavefest: A Broad Perspective on Finite and Infinite Dimensional Dynamical Systems,” took place in Barcelona, Spain, and drew many accomplished researchers in the area. 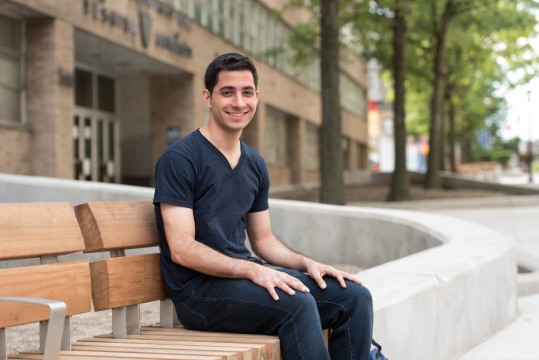 Shmalo, who studied mathematics and philosophy at Yeshiva College and is currently earning his master’s degree in mathematics at Yeshiva University, shared a paper that provides a simple proof of the existence of fixed points and periodic orbits in dynamical systems when certain conditions are satisfied, titled “Combinatorial approach to detection of fixed points, periodic orbits, and symbolic dynamics.”

“Chaotic systems are very difficult to analyze, because even slight differences in initial conditions can cause drastic changes in the long-term results,” said Shmalo. “Therefore, when dealing with such systems we tend to analyze attributes which are stable and don’t change dramatically. Fixed points and periodic orbits are like that—they’re elements of the systems that keep ‘coming back to themselves’ and don’t change a lot in the long term.”

In addition, Shmalo’s research—which was conducted with his mentor, Professor of Mathematics Dr. Marian Gidea—offers a constructive method of finding the key geometric objects that organize the dynamics of a chaotic system. “Sometimes in mathematics we can claim that something exists, for example a fixed point exists in a system, but we cannot actually find that thing,” said Shmalo. “This research provides an algorithm for finding fixed points and periodic orbits once certain conditions are satisfied.”

Shmalo became interested in chaos theory as he worked with Gidea, who specializes in the field. “I love it—being able to analyze chaotic systems and say something about them is both very difficult and very interesting,” he said. “This particular topic in chaos theory works very well with my talents, too. It’s very pictorial in nature. Most of the research involves drawing a lot of pictures and seeing what we can say about them.”

“Yitzchak is a brilliant graduate student who has the potential to become a mathematical star one day,” said Gidea. “Throughout the research, he displayed an amazing creativity, a great passion for mathematics and an eye for subtleties. I have never felt that I was working with a student who was more like a colleague mathematician. The work that he presented at the conference in Barcelona has now been submitted for publication to a top professional journal. Such accomplishments stand as proof of the high quality of our graduate program, and show promise that the distinguished legacy in mathematics at Yeshiva University will be continued.”

Ultimately, Shmalo hopes to pursue a doctoral degree in mathematics.

“The professors in the master’s program at YU are the best part of the program,” he said. “They are willing to spend so much time with you and work hard to help you understand different topics, in addition to connecting you with great research and conference opportunities.”