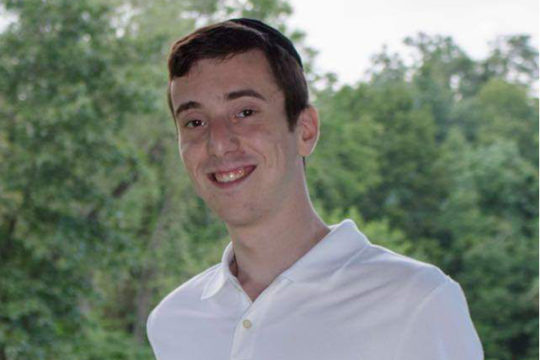 Judah Goldfeder ’20YC is a double major in computer science and mathematics, with a minor in Jewish studies. From June through August 2018, he participated in the Bar-Ilan – Yeshiva University Summer Science Research Internships program, which places select undergraduates from Yeshiva College and Stern College for Women in one of Bar-Ilan’s state-of-the-art research laboratories. The interns take part in research conducted by one of the school’s more than 180 distinguished science and engineering faculty members.

Goldfeder’ s internship at Bar-Ilan resulted in the publication of two separate papers on the use of computational tools in biological research.

YU News sat down with him to discuss the nature of his research and his plans for the future.

Why did you decide to pursue a double major in computer science and mathematics with a minor in Jewish Studies?
I chose to study computer science and math because I want to research artificial intelligence (AI), a field which is largely at the intersection of both disciplines. My minor in Jewish studies is not part of my career aspirations but just something I found very valuable as a religious Jew in the modern era.

Tell us about your internship in scientific research at Bar-Ilan.
I have always wanted to pursue a career in research, so applying to Bar-Ilan for admission to their summer 2018 internship program seemed like the right step. I worked under the supervision of Dr. Hillel Kugler, who is working on new algorithms and tools for the synthesis of gene networks, which basically means creating computational tools to aid biological research. Dr. Kugler, who is a member of Bar-Ilan’s engineering faculty, has worked previously at Microsoft Research in Cambridge in the U.K. and at New York University’s Courant Institute. While I was only at Bar-Ilan for one summer, I continued working with Dr. Kugler throughout the next eight months remotely, which is how we published two papers together.

Can you explain the focus of your research as presented in your two published papers?
My two papers presented a new tool that I had created to aid in biological research. The tool is given a description of a cell as well as a set of various observations made about the cell over the course of time. The tool then uses the cell description in concordance with the observations and gives back a more refined and accurate model of the cell.

While I don’t have much of a background in biology, I found this work interesting for several reasons. I thought it was very cool that I could write a tool to aid future research. I also thought it was amazing how a biological problem such as the function of a cell could be represented in purely mathematical terms.

When were they published?
The first paper was published in December 2018 and was accepted at the first conference it was submitted to, the International Symposium on Molecular Logic and Computational Synthetic Biology in Santiago, Chile. The second paper did not make the cut initially. So, based on reviewers comments, I made adjustments and submitted it to the International Conference on Computational Methods in Systems Biology in Trieste, Italy. It was accepted and published in September 2019. I was the main author of both papers, and Dr. Kugler was the co-author.

Are you pursuing any research topics at the moment?
This past summer I interned at Facebook, where I got to work on a Computer Vision team at Facebook AI Research. Computer vision is the field that deals with computers understanding photo and video images. I want to continue along that path and research machine learning and artificial intelligence (AI).

What does the future hold for you?
I am hoping to pursue a PhD in AI and am in the process of applying to graduate programs.