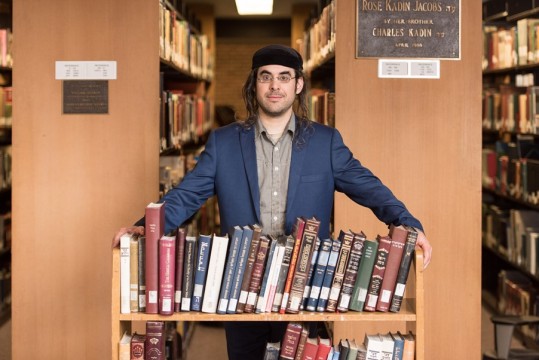 For newly-minted Bernard Revel Graduate School of Jewish Studies PhD Gabriel Wasserman, piyyuṭ [Hebrew liturgical poetry] is more than just the subject of his dissertation; it’s his life’s passion, and the manifestation of “living ritual” within Judaism.

Wasserman’s interest in piyyuṭim began in childhood, while looking through his father’s Jewish holiday prayer books: “I saw that the piyyuṭim were special, unique liturgy for each of the holidays—the first day of Pesach, the second day of Pesach, Shabbat Chol Ha-mo’ed Pesach, etc.—and not just on Rosh Hashanah and Yom Kippur, as is common in synagogues today. And I loved the idea of variegated, interesting liturgy for each day.

“That led me down a path, as a teenager, to seek out more and more special liturgy, eventually to write some in my 20s, and become a researcher into unpublished material,” said Wasserman, a New York native. “It also led me to Washington Heights, to find one of the few remaining communities, K’hal Adath Jeshurun, where this liturgy is still said.”

Wasserman’s dissertation, which he defended in March, “presents and contextualizes piyyuṭim that were recited in medieval European synagogues on Chanukkah.” The project includes the Hebrew texts of these Chanukkah piyyuṭim, edited from manuscript and equipped with a critical apparatus; many of the texts are presented in print for the first time. Wasserman explains the various regional liturgical rites to which each of the poems belongs, and the different midrashic [rabbinic interpretations] and other sources that the poets used in order to weave the narrative and non-narratives themes of their poems.

Wasserman praised his adviser, Dr. Ephraim Kanarfogel, E. Billi Ivry University Professor of Jewish History, Literature and Law, for giving him the leeway to choose a creative topic that was off the beaten path. Kanarfogel’s course on History of Halakhah was Wasserman’s first class at Revel. “I think it was his energy in the class that made me want to work with him,” said Wasserman.

For the upcoming year, Wasserman is pursuing several academic options, and may travel abroad for research or other career opportunities.

Beyond his dissertation, Wasserman’s most prized achievement to date is his self-published edition of the Passover Haggadah, whose title, “Ashirah va’ashannenah ba-ḥashiqot” (“I sing and recite studious texts with desire”), borrows from the poetry of Seventh century poet Rabbi Eleazar b. Qallir. Wasserman began the project in 2010, completing six editions since. It has sold over 160 copies, and Wasserman intends to find a publisher for future editions.

The Haggadah—in Hebrew and English, with sprinklings of Yiddish and Ladino—is a product of Wasserman’s astounding scholarly acumen and poetic creativity. It contains historical halachic analysis, numerous piyyuṭim from the Middle Ages, as well as piyyuṭim that Wasserman wrote himself. For example, in the “Grace after Meals” text for the seventh day of Passover, Wasserman incorporates an original, alphabetic acrostic poem in three sections, in the style of traditional piyyuṭ. Verses in the first section end with the word “yam” [sea], in the second section with “yabbashah” [dry land], and in the third with “shirah” [song]. The themes reflect the Exodus story, but the verses also contain clever references to food and sustenance, as befitting a post-meal prayer.

To explain his larger philosophy of piyyuṭ, Wasserman utilized an unlikely parallel: how Liza Minnelli incorporated dramatic performance into her musical numbers after realizing that her voice couldn’t match that of her mother, Judy Garland. “Similarly, not everyone can be a Cantor Moshe Koussevitzky or Yossele Rosenblatt,” said Wasserman, “but everyone can perform Yetzi’at Mitzrayim [the Exodus] with song and praise and piyyuṭ.”
http://credit-n.ru/zaymyi-next.html