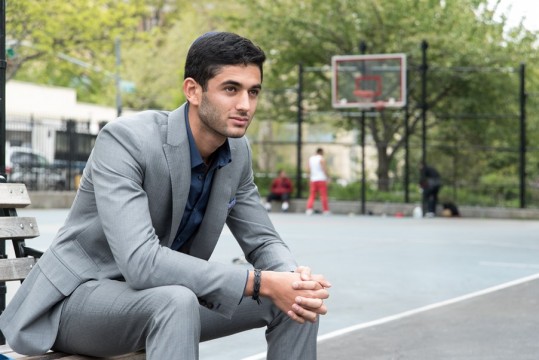 For Sy Syms School of Business graduate and student-athlete Joseph Ammar, attending Yeshiva University was an opportunity to become “a little more independent and responsible,” and connect with his heritage. “I wanted to get closer to Judaism while continuing to play basketball and represent the Jewish nation while doing so,” he explained. “Another reason was to be close to my brother, who lives in New York, as well as make a great group of friends who have a similar background to me.”

Born in Paris, France, Ammar moved with his family to Miami, Florida, at the age of four. At YU, which boasts a large contingent of French students, Ammar found a peer group he could really connect with. “It was great to be around students who were also from Paris, and be able to have a good laugh and speak your native tongue with them,” he said.

Ammar majored in finance and minored in management, because of his “love for math and numbers.” After graduation, he said he plans to begin work in real estate finance, in order to learn the ins and outs of business, and get the most experience and education possible at the outset of his career. Ammar expressed appreciation for Dr. Rachel Calipha, visiting professor of finance: “She was always a great finance teacher and always cared so much about her students.”

Outside the classroom, Ammar has maintained an impressive diversity of commitments. He was involved in YU’s undergraduate Finance Club, held internships at two large investment firms (Raymond James Financial and Morgan Stanley), worked part-time for a high-end catering company, and volunteered with the Friendship Circle, where he worked with mentally disabled individuals. Furthermore, Ammar served as a student mentor in MTA’s LEAD program, in which college students teach YU High School students about entrepreneurship. Ammar worked with three students developing a food truck business idea, pointing out different ways to maximize the product’s efficiency as well as potential challenges, like licensing fees and permit applications. “The experience taught me how to further develop a product, and also how to be a teacher and mentor for younger students,” said Ammar.

But Ammar said some of his most memorable moments at YU were on the basketball court, where he played forward for the for the men’s NCAA Division III basketball team. In February, he helped lead the team to victory against St. Joseph’s Long Island, clinching the Maccabees’ first home playoff game since 2002, scoring nine points on three consecutive three-point plays in the second half, to go along with a block and a steal. Then in March, Ammar captained YU’s team to the National Hillel Basketball Tournament championship, beating out more than 30 teams from across the country, and winning MVP.

According to Ammar, the team forged an unforgettable camaraderie as they represented the University and community. “The home playoff game, during which all the students and fans sang Hatikvah as a group, was one of the greatest feelings,” said Ammar. “At YU, I had many memorable moments, with a great group of friends who you know will always be there for you growing older.”