Students of all ages and backgrounds come to Yeshiva University to pursue a range of professional and personal dreams, from scientific research and medicine to law, Jewish education and the creative arts. Our students seek to harness their unique talents and YU education to make a lasting impact on the world around them. This spring, when they graduate from YU, these new alumni will hit the ground running. 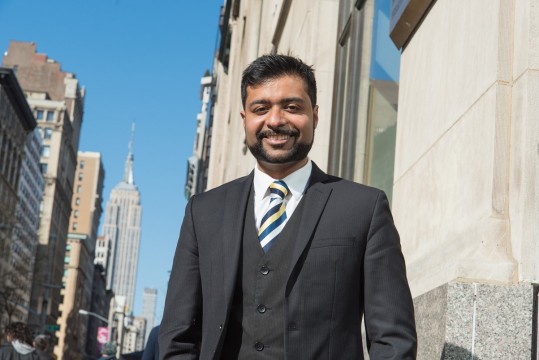 Benjamin N. Cardozo School of Law graduate Amit Noor’s interest in immigration and human rights law grew out of personal experience. Originally from Bangladesh, Noor moved to New York in 2002 at age 10, with his brother and mother, a political refugee. In addition to not knowing whether they would be able to remain in America, they were separated from Noor’s father for over a decade. “I eventually received help from an amazing lawyer at Human Rights First,” said Noor. “She was instrumental in getting my father’s visa approved.”

The experience sparked Noor’s desire to pursue a career in public service. “During this time, I began to realize how important the law is and how it can be used to help people,” said Noor, who earned his bachelor’s degree in business journalism from the City University of New York. “I wanted to make a meaningful impact on someone’s life just like that lawyer did for me and my family.”

For Noor, Cardozo was a natural choice. “I decided to attend Cardozo due to the school’s growing reputation, and specifically because I wanted to be a part of its Kathryn O. Greenberg Immigration Justice Clinic (IJC), which is very well known for its work and training,” he said.

Noor described the time he spent working at the IJC as his most memorable experience at Cardozo. “It was a very demanding clinic and we worked extremely hard, but our class bonded over this experience,” he recounted. “We talked about life and worked late into the night every week. It was an amazing experience.”

In addition, Noor served as a staff editor for the Public Law, Policy and Ethics Journal, as secretary of the Public Interest Law Students Association and as vice president of FIRE (For Immigrant Rights and Equality). He interned at the Human Rights and Atrocity Prevention Clinic, and currently externs at the Health Care Reform Field Clinic. He also participated in Cardozo’s Intensive Trial Advocacy Program, a two-week immersion course in which students learn cutting-edge strategies for courtroom litigation.

Last semester, Noor won asylum for his client, a Falun Gong practitioner from China, at the Human Rights Clinic. “Seeing her smile and seeing the tears roll down her friends’ faces was probably one of the moments that I will always remember,” he said. “Being able to assist someone in need of good legal service, despite not having the finances to hire an attorney, is the most rewarding aspect of my law school career.”

Noor noted Cardozo’s outstanding faculty, including Professors Deborah Pearlstein and IJC Director Peter Markowitz. “I was amazed at how hard he works himself and how much he cares not only for his students but also about the projects he is involved in,” Noor said about Markowitz.

Noor recently became a U.S. citizen, and expressed gratitude to his parents for supporting him with their limited resources as he studied. “I consider my mother and my father to be my heroes because of the sacrifices that they made for me,” said Noor. “Considering the challenges I faced, I feel privileged to be a student at Cardozo.”

Post-graduation, Noor accepted a two-year clerkship with the Department of Justice Honors Program at the New York Immigration Court—the very Court where he sat with his mother at her 2009 hearing, as she was granted asylum.