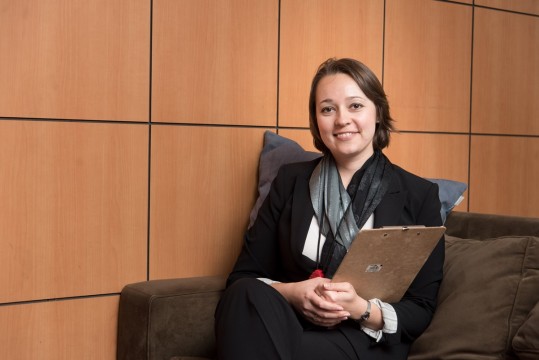 When Siberian-born Kristina Dumas immigrated to the United States 10 years ago, she knew she would need additional training in psychology to launch her career on this side of the Atlantic, even though she was already qualified to practice in Russia. But the language barrier was a challenge. While Dumas concentrated on teaching herself English, she worked at an animal shelter’s veterinary clinic in Washington, D.C. She was deeply affected by a young girl she met on the job: the child had been diagnosed with severe autism and a seizure disorder but had recently obtained a therapy dog—“an adorable golden retriever puppy.”

“I began volunteering with the girl and assisting her therapists,” said Dumas. “I also helped train the puppy and learned a lot about the benefits of animal-assisted therapy from the dog’s special trainer. When I was deciding what kind of studies I wanted to pursue in the United States, I thought that clinical psychology would be an ideal field for me because I could work with individuals affected by various neurological conditions, including doing the work that would involve animal-assisted therapy.”

So Dumas enrolled in the Mental Health Counseling program at the Ferkauf Graduate School of Psychology, where she focused on working with young adults affected by autism spectrum disorder at her field placement. She also began researching multisensory integration—the set of processes through which the brain pieces together vision, smell, touch and taste, to make sense of the world as a whole—at the nearby Albert Einstein College of Medicine’s neurophysiology laboratory. She was especially interested in how the process worked for children and adults who fell within the autism spectrum. Dumas then entered the Clinical Psychology Ph.D. (Health Emphasis) program at Ferkauf to begin her training as a clinical neuropsychologist. There, under the mentorship of Ferkauf faculty Dr. Roee Holtzer and Dr. Jeanette Mahoney, she began to explore how multisensory integration functioned in older adults, a topic which eventually became the bedrock of her dissertation.

“The ability to have a health emphasis and neuropsychology minor in Ferkauf’s Ph.D. program was very attractive to me,” said Dumas. That was partly because, in addition to her fascination with animal-assisted therapy and multisensory integration, she is a die-hard hockey fan. “Through my studying of neuropsychology I developed a strong interest in sports-related brain injuries. Because of these interests and passions there could not have been a better professional field for me than clinical psychology with a concentration in health psychology and clinical neuropsychology—a very unique training combination that Ferkauf offers.”

Dumas also loved the opportunities she had as a student to meet and learn from dedicated neuropsychologists at many scientific conferences. She is especially proud of the student neuropsychology interest group she and classmate Victor DelBene created for the American Psychological Association’s Society for Clinical Neuropsychology to enhance Ferkauf’s training within the clinical neuropsychology minor. “We connected students from other area schools with similar interests in neuropsychology through organizing joint events that were fun and informative,” she said.