On June 27 on NBC, rabbi-in-training Akiva Neuman, sporting his kippah and tzitzit, will attack the obstacle course of American Ninja Warrior to prove that physical fitness is part and parcel of being an Orthodox Jew and, more importantly, that anything people set their minds to do can be done.

On the surface, Neuman is leading the straight-forward life of a Yeshiva University alumnus. In 2015, he graduated from Sy Syms School of Business with an accounting degree and is currently earning semicha [ordination] at YU-affiliated Rabbi Isaac Elchanan Theological Seminary. He lives in Holliswood, Queens, with his wife Chani and six-month-old son Koby, and works as youth director at the Young Israel of Holliswood.  In the fall, he’ll begin an accounting career at Deloitte—a position he found through the YU Career Center.

As a child growing up in Highland Park, New Jersey, Neuman found himself drawn to sports and staying physically fit. “I played in Yeshiva League hockey and basketball,” he explained, “and in high school, I was the captain of my soccer and hockey teams. Staying in shape has always had a value to me, and it’s been one of my strengths.”

How did he get from there to competing on a hit national TV show? “Occasionally I go to the gym,” he said, “and the TV screen in my exercise area had American Ninja Warrior playing on it. It was the first time I’d ever seen it, and I thought, ‘This is awesome!’” As a lark, he went online and submitted an application.

Much to his surprise, the producers got back to him. They had him send a video about himself and a second video demonstrating that he was physically fit. “I was shocked when they invited me to be on the show!” But Neuman explained that one of the things he likes about the show is its inclusiveness. “They don’t look for only one kind of character,” he said, “and in me they had an Orthodox Jew training to be a rabbi. They were intrigued by my story because the show tries to go for all sort of characters and personalities.” 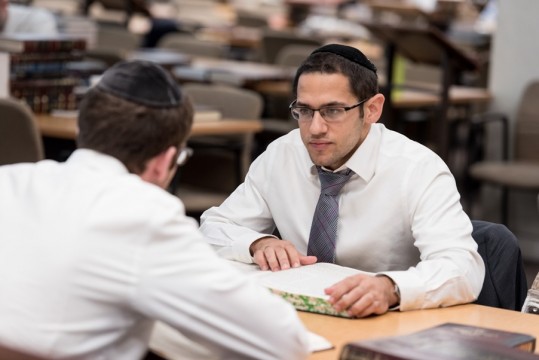 On Friday, May 27, he arrived in Philadelphia to make his run at fame and glory, wearing all his gear plus a blue “Team Akiva” tee-shirt, emblazoned with the silhouette of a man flexing his biceps and holding aloft the Torah. “I was incredibly nervous and excited,” he said. “Here I was, representing the Jewish people, the Ninja Rabbi, and I jumped up and down and breathed hard and shook out my hands, and then I was off.” Neuman described his memory of running the course as a “flash,” but he also recalled playing with the audience as he barreled through, hearing them chant “Rab-bi, Rab-bi, Rab-bi!”

“The responses to what I did were pretty positive,” he said, “with a lot of people saying, ‘You’re making us look good!’ I want to be an inspiration for everyone, especially the Jewish people, encouraging them that even in the midst of our very busy lives, there is still room to care of ourselves physically and uphold the words of the Torah, which teaches us to take care of our bodies.”

Neuman’s preferred exercise regimen is push-ups, pull-ups, sit-ups, and some running (even if it’s just running in place), simple exercises anyone can do anywhere. “Even in the craziest of schedules you can find 10 minutes to do these four things, and they will give you energy.” He added, “If you really can’t find 10 minutes, then it’s time reanalyze your schedule: something is out of balance.”

Neuman is already thinking about his next physical challenge: completing a triathlon. No word yet about what he’ll wear for the swimming leg of the competition, but given his devotion to his rabbinical studies, and his concern for doing activities like this with the proper spiritual intentions, a waterproof kippah and tzitzit are not out of the question.