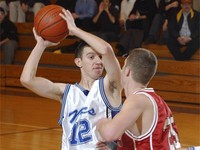 Aug 14, 2006 — The 2005-2006 Yeshiva University varsity athletic teams distinguished themselves on the court as well as in the classroom. Individual student-athletes and entire teams received awards and nominations to both all-star and all-academic teams.

Three students on the Lady Maccabees basketball team received weekly awards from the Hudson Valley Women’s Athletic Conference (HVWC). Sophomores Ilana Sapadin and Elana Kasztl were each twice rewarded for their excellent play and were awarded Rookie of the Week while senior Janna Almo twice received the HVWAC Player of the Week Award. Ms. Almo was also named to the Dr. Betty Shabazz Memorial Tournament All-Tournament team and earned all-star honors from the HVWAC. Janna also received the ECAC Merit Award for Yeshiva which is presented to the most outstanding graduation female scholar-athlete. In fact, Ms. Almo was able to keep a perfect 4.0 GPA over the course of her four season career.

The team was recognized for its academic achievements as well the Women’s Basketball Coaches Association ranking of the Lady Maccabees as 5th in the country due to the team’s high combined GPA. This is the second time in the last 5 years that the team has made the top 10. The Lady Maccabees were ranked second for the 2000-2001 season.

Four members of the Men’s Volleyball team, Steven Davis, Yosef Herzog, Baruch Jakubovic, and Joseph Schwartz, were named to the Northeast Collegiate Volleyball Association’s all-academic team. Students-athletes must have a minimum GPA or 3.50 to qualify. The student-athletes combined GPA’s qualified the team for an all-academic award as well.

At the conclusion of the 2005-2006 season, the Skyline Conference released a listing of all the student-athletes that were named to its all-academic team. Thirty-five Yeshiva University student-athletes were given the award. Every player on the Men’s Basketball team received the award, making the Yeshiva Maccabees the only team in the 16 sport, 11-institution conference to have all its players named. YU averaged seven players named to the all-academic team sponsored in the conference while the second best school averaged 5.1 athletes in each featured sport.

Courts, Men's, On and Off, Score, Teams, Women's