The National Endowment for the Humanities (NEH) has named Dr. Rachel Mesch, associate professor of French and English at Yeshiva College, a recipient of its 2017 Public Scholar Program grant. Public Scholar Program grants are awarded to writers whose books are accessible to a broader audience outside of the academic arena and are intended to help demonstrate the continuing relevance of the humanities in the public sphere.

Mesch was awarded a $29,400 grant for her book in progress, Trans before Trans: Three Gender Outlaws in Nineteenth-Century France. “I was probably motivated through my teaching to try to figure out how to interest a broader audience of non-specialists in my field,” said Mesch. “Over the past few years, I started sharing my scholarly work through various online writing, including a column for the history blog, Wonders & Marvels. This book continues in that vein, in terms of trying to move beyond the scholarly audience of my previous works in order reach both scholars and non-scholars─which is what this grant is about.”

Trans before Trans tells the story of three fascinating women writers—housewife-turned-archaeologist Jane Dieulafoy (1851-1916), art critic Marc de Montifaud (1849-1913) and novelist Rachilde (1860-1953)—who “did not fully see themselves as women,” said Mesch. “Through their examples, [my work] looks at how people who struggled with gender identity understood themselves before the modern category of transgender existed. People who identify themselves through the modern and hugely expansive category of transgender, which is not just about crossing over from one gender identity to another, but can also mean not identifying with either gender, or identifying with both in different ways—often feel compelled to write. My subjects wrote incessantly, and I use modern notions to help illuminate the stories that they told, which were often inscrutable at the time.”

While the intended audience for this book is broader than that of Mesch’s previously published works, The Hysteric’s Revenge (Vanderbilt University Press, 2006) and Having it All in the Belle Epoque (Stanford University Press, 2013), the topic extends on the same themes, questions of gender in France in the late 19th century. “This work fascinates me because of its relevance to our contemporary discussions,” Mesch explained, “but also, because it is fundamentally about a human struggle that goes beyond the questions of gender identity to those of self-understanding. The stories of the three subjects in Trans Before Trans are about how to come to terms with who you are, when that might be different from what is expected of you.” 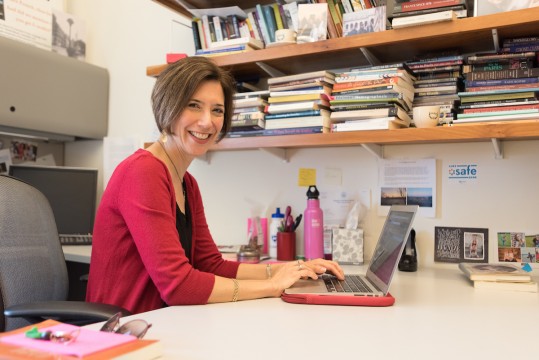 The book is meant to connect the present to the past, Mesch said, “and to help readers understand the richly textured discussions of identity associated with our present moment by situating them in a longer critical and historical trajectory.” In this way it is connected to Mesch’s teaching philosophy. “In my classes,” she said, “we are always connecting the present to the past, and using modern lenses to better understand the times and places that might otherwise seem remote to students. My classes are about getting students to be interested in the past and in worlds outside of their own, but also about developing an appreciation for the humanities and how it can broaden one’s experience.”

Mesch’s work has greatly impacted her students, and her Yeshiva College colleagues recognize Mesch’s contributions to their department as well. “Professor Mesch has established herself nationally as an acclaimed specialist in French history, literature, and culture with a focus on gender studies,” said Dr. Lauren Fitzgerald, chair of the English department. “The NEH Public Scholar grant represents an important milestone in her ongoing scholarly career, particularly as it recognizes her work as a public intellectual committed to exploring topics that appeal to a wide audience. We are honored to count her as a colleague and as a resource for our students and the YU community at large.”

Linda Shires, chair of the department of English at Stern College for Women, added, “Rachel Mesch is one of the foremost scholars in her field, 19th-century French studies. It is a testament to her outstanding accomplishments that she has secured one of the highly-competitive 2017 NEH awards. We look forward with great anticipation to results of her new research.”

The grant will give Mesch the time to finish her manuscript and present those findings. “This grant will allow me to take a semester off from teaching in order to finish writing the book,” she said. “I had a small Dr. Kenneth Chelst Book Grant (awarded by Yeshiva College and named for alumnus Dr. Kenneth Chelst ’65YUHS, ’70YC, ’72R) for this project last year, which allowed me to hire a YU student to transcribe some of the archival materials that I had collected on previous trips to Paris. But this grant will allow me to get back to Paris to complete some additional archival work.”