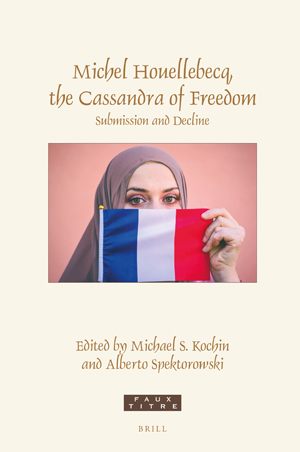 Dr. Neil Rogachevsky, associate director and assistant professor at the Zahava and Moshael Straus Center for Torah and Western Thought, recently published a chapter in Brill’s Michel Houellebecq, the Cassandra of Freedom: Submission and Decline, a collection of essays on French writer’s 2015 novel, Submission.

Dr. Rogachevsky’s paper, “Michel Houellebecq’s Comparative Political Science of Religion,” analyzes the “current state of debate on the role of religion in the contemporary world.” Dr. Rogachevsky makes the case that “our understanding of both religion and politics is marred by our tendency, encouraged by contemporary social science, to think of religion as a generic category and thus abstract from decisive differences between specific religions.” Houellebecq’s Submission, however, “attempts to portray what religion and religious belief look like from the inside,” thus helping us to imagine how adherents of Islam, Christianity and Judaism might see the world.

“I was pleased to contribute an essay on French writer Michel Houellebecq’s treatment of Judaism, Christianity and Islam in his satirical novel Submission in Michel Houllebecq: Cassandra of Freedom,” said Dr. Rogachevsky. “Houellebecq is an important if frequently misunderstood writer who can help illuminate and enrich our own literary and political ideas today.”

To purchase Michel Houellebecq, the Cassandra of Freedom: Submission and Decline, click here.

Dr. Rogachevsky’s research interests are Israel studies and the history of political thought. His first book, which addresses the political theory of the founding of Israel, is forthcoming from Cambridge University Press in 2022. He received his Ph.D. in history from the University of Cambridge in 2014.