“Mobility as a Service,” sponsored by YU Wall Street Group and Technology Group on Wednesday, Jan. 15, 2020, took on the heady topic of how to move people from A to B efficiently, cheaply and safely.

The two groups are part of Yeshiva University’s Professional Networks, which brings together industry-related professionals for networking, educational and career opportunities.

On this particular occasion, the event, hosted by Deloitte, brought together Sam Jurkowitz (co-founder and co-CEO of Buggy TLC), Paul Suhey (co-founder and COO of Revel) and Zachary Wasserman (chief strategy officer at Via) in conversation with Michael Granoff (founder and managing partner of Maniv Mobility).

Granoff began by stating that society now finds itself in what he called the “fourth epoch” of transportation, the start of which he dated to the financial meltdown of 2008. That immense market shake-up, according to Granoff, also occurred just as people started to download third-party apps to their phones and oil prices began to spike. The confluence of these factors began the process of “unbundling” in many industries, where products once thought of as unitary began to be broken into constituent parts (think of cable services or the music industry). In transportation, this meant that people could now buy trips through their phones rather than buy cars at dealerships and that they may be taking those trips in vehicles tied more and more to electricity (think scooters, mopeds and other such devices).

During the next hour, the four panelists discussed many of the factors now shaping what they called “microtransit” and the burgeoning choices people have to get themselves from one place to another. They touched upon how these choices play out in urban “transit deserts,” the population density needed to make microtransit profitable, the compatibility (or not) of microtransit with urban transit systems, the role of public policy (e.g., capping the number of vehicles or working on ballot initiatives), issues of equity and affordability, the inevitability (or not) of autonomous vehicles and the technical obstacles to improving battery performance.

Lawrence Askowitz ’87YC, co-chair of the Wall Street Group, thanked the panelists for their insights and analysis and explained how events like these, organized by Yeshiva University, were a “win-win-win-win”: they were informative for the audience, helpful to the panelists, useful for students in their search for internships and employment, and crucial to the University’s mission of providing an education that is lifelong and enduring. “Last year, we had nearly 1,500 people come to our long roster of events,” he noted with pride, “and we expect even more to attend this year because as the world keeps changing, YU is committed helping people stay on top of the latest developments and continue to learn. Our topics are fascinating, and the speakers are consistently fantastic.” 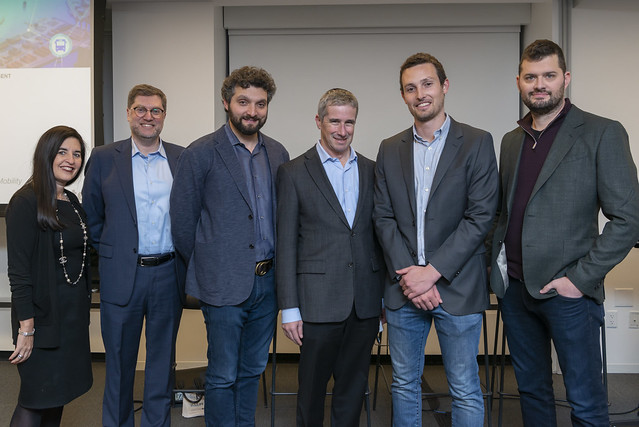