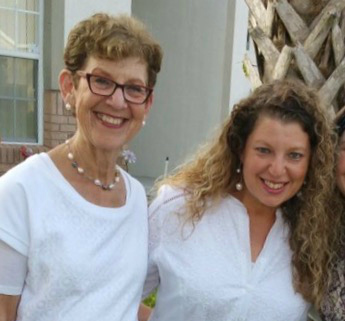 There are several parent/child delegations set to arrive at this year’s Reunion on Sunday, May 17, at the Grand Hyatt in New York, lending the annual event a special family feel. Included in these child/parent pairing are Estelle Glass ’65S and Rina Fuchs ’90S, both of Teaneck, New Jersey.

Estelle was born on the Lower East Side of Manhattan, and, part of a YU family, decided to attend Stern College for Women. “I liked the small class size, and I wanted to continue my Jewish education,” said Estelle. At Stern, Estelle majored in English Literature (she was one of the few English majors at the time, whereas today, it’s one of the most popular majors among students), which came in handy during her 27-year run as an English teacher at Bruriah High School in Elizabeth, NJ, where she was also chairperson of the English department. Estelle also had the opportunity at Stern to visit her future mother-in-law, Mae Glass, who worked in the YU Office of Admissions for many years. She especially enjoyed her classes with English professors Morris Epstein ’42YC, a”h, former chairman of the English Department, and Laurel Hatvary.

“When I taught English at Bruriah, I tried to remember that students can approach any subject as long as it is handled with sensitivity,” recalled Estelle. “That’s a critical lesson I first discovered at YU.”

Estelle and her husband, Lenny, raised their children—Ozi, Rina, Michael and Rachel—in Elizabeth, and Rina even had her mother as a teacher at Bruriah. “It could have been awkward and uncomfortable, I suppose, but I really felt like I had the best of both worlds,” said Rina about the experience. “I got to spend a lot of extra time with my mom and also benefit, along with my friends, from her vast knowledge. She was an incredible teacher, and I’m very proud of her.”

When it came time for Rina to attend college, she also knew that YU would be the best place for her. As a Fashion Merchandising and Marketing major at YU’s Sy Syms School of Business, Rina was able to pursue her love of fashion and receive a well-rounded education in other subjects. After she gained a bit of experience in the fashion world, she switched gears and worked as a child support case worker. She helped collect child support from parents who were remiss in their payments for two years, and then took a few years off from the professional field to stay at home with her children.

She and her husband, Mo Fuchs, lived in Highland Park, New Jersey, before moving to Teaneck.

Rina has been a teacher at Ganeinu Preschool in Teaneck for the last ten years, and also works at Camp Morasha during the summer. Mo, who works in real estate management, is affectionately known as Coach Mo at the Torah Academy of Bergen County High School for Boys, where he coaches the hockey team, and around town. Rina and Mo have four daughters: Lauren; Deena, who is currently a student at Syms where she is pursuing Marketing; Alex; and Lilly.

“Deena is so happy at Stern and found a niche very easily,” said Rina. “That would be harder to do at a much larger and more impersonal college.”

Ruminating on her own time at YU, Rina remarked, “Most of the friendships I have now are with people I met at YU. It’s a place where you form so many deep and lasting friendships by virtue of the shared values and goals so many of you have.”

And when Estelle moved to Teaneck just a few years ago, she and Lenny instantly found a network because of YU. “If you went to YU, it’s like everywhere you go, you have a chevrah,” said Estelle. “It’s a wonderful thing to be a part of.”

Through YU’s challenging times, Estelle and Rina have only become more resolute in their conviction that YU is one of the most important institutions in the Jewish world today. “There aren’t many places where you can receive an excellent education in both limudei kodesh and secular studies, where you can learn Torah seriously and then go on to be any kind of professional you dream about becoming,” Estelle explained. “YU is the last bastion of moderation in a Jewish world that is only becoming increasingly polarized.”

Estelle points to her many friends and acquaintances who are retired from or still enjoying a variety of impressive professional careers and who are also active in their observant Jewish communities. “That’s because they went to YU,” she said.

Though she is retired, Estelle remains active by writing for local papers and for her own edification. In honor of her 70th birthday, her children published a collection of stories and personal essays she wrote. She also recently participated in Stern College’s Winter Beit Midrash for community members, and she and her family regularly attend the RIETS Yarchei Kallah Shabbaton every Shavuot. She and Lenny have also established scholarships in memory of their parents, Isidore and Ruth Brier a”h and Jack and Mae Glass a”h.

Both mother and daughter are excited to attend this year’s Reunion and see old friends.