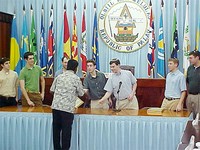 Jan 27, 2005 — Hakarot ha’tov (expressions of gratitude) was the motivation and theme of a recent trip to the Republic of Palau by 10 students from Marsha Stern Talmudical Academy—Yeshiva University High School for Boys. The students embarked Jan. 9 on the 10-day journey to show their appreciation for the tiny North Pacific nation’s steadfast support of Israel in the United Nations.

Other than the United States, the three nations of Micronesia—the Federated States of Micronesia (FSM), the Marshall Islands, and Palau—are the only nations who consistently vote in favor of Israel when resolutions condemning Israel come before the UN General Assembly.

“Government to government, Palau has a good relationship with Israel, and is the recipient of Israeli diplomatic and foreign aid,” said Daniel Schuval, director of student affairs at MSTA and trip coordinator. “But many Palauans had never met Jews before, and this was an opportunity for us to explain who we are and why the Jewish community outside of Israel is so grateful for their support.”

Schuval said the trip was the first of its kind to Palau, and that people there enthusiastically embraced the students’ symbolic gesture of friendship.

The trip was the culmination of a months-long project that began when MSTA junior Avram Sand became interested in why the three Micronesian countries so consistently support Israel. His phone call to the Micronesian Mission to the UN led to its ambassador speaking at the high school last spring and to Sand working at his office last summer.