Mark Weingarten started playing the violin at age three, thanks to some inspiration from a “Rechov Sumsum” video featuring Itzhak Perlman. Fast forward 18 years and that early love of music has propelled Weingarten, now a junior at Yeshiva College, to share that passion while connecting with patients during regular visits that he organizes for college students to the elderly, veterans and sick children.

While studying in Israel at Yeshivat Kerem B’Yavneh, Weingarten began playing music for patients at Jerusalem’s Hadassah Medical Center every Friday. When he came to Yeshiva University last year with his twin brother, Michael, they sought to replicate those efforts on a larger scale, resulting in the founding of Music Vs.—Musical Undergraduates’ Support Initiative for Children, Veterans and Seniors.

The program aims to use the universal language of music as a bridge to form connections with those less fortunate and to lay the foundation for lasting relationships.

“What’s unique about Music Vs. is that it seeks to transcend the impersonal atmosphere of large scale events in an attempt to create long term relationships with the people we visit,” said Mark.

On the Friday preceding Memorial Day, the Weingarten brothers were joined by close to 20 fellow students, undergraduate men and women from YU, who devoted two hours of their afternoon – in the midst of final exams – to visit war veterans at the James J. Peters Veterans Affairs Medical Center in the Bronx.

“We’re blessed to be able to spend Memorial Day weekend building on our relationships with veterans living in our community,” Mark said. “These missions provide us with incredible opportunities to learn from their fascinating life experiences. They also allow us to express an integral part of our heritage, our gratitude to the heroes who have given so much to defend this country and to preserve the freedoms which we enjoy today.”

The dreary, rainy afternoon was brightened by Music Vs.’s performance, as the audience clapped along to the singing, accompanied by students playing flute, guitar and violin. Rousing renditions of “God Bless America,” “America the Beautiful,” and the “Star Spangled Banner” brought smiles to the veterans’ faces.

“It’s a real treat to have these young people here,” said veteran Paul Haynes, a quadriplegic who served as a forward observer in Vietnam from 1967 to 1968. “The music soothes your soul. I love it.” 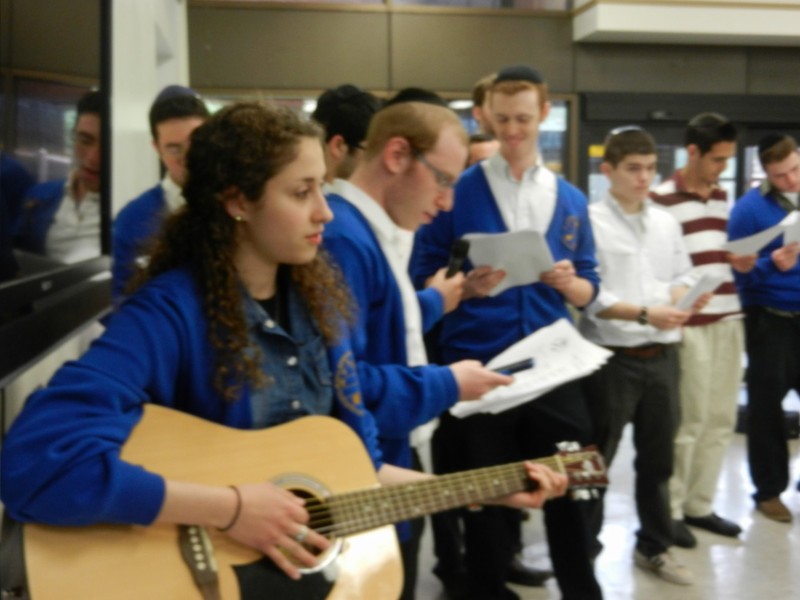 After the singing, the students, decked out in matching blue cardigans featuring the Music Vs. logo, mingled with the veterans, swapping stories and sharing personal histories with each other. Some continued to play their instruments, serenading the patients and taking additional song requests.

“We specifically try to visit those seemingly forgotten by society and even other charities,” said Michael Weingarten, who is motivated to participate in memory of his grandfather. “I seek to follow in his footsteps and use the gifts that God has given me to change the world, like he did, for the better.”

Drawing on its early successes, Music Vs. has now spread to other college campuses in New York and beyond. Schools that have organized events this year include Yale, Cornell, Queens, Lehman, University of Pennsylvania, Emory and Lander College.

Other members of the Music Vs. executive team include Isaac Kleinman, chief communications officer, and national directors Gavriel Apfel, a student at Lander College; Arieh Levi, a sophomore at YU’s Sy Syms School of Business; and Tova Weingarten (no relation to the founding brothers), president of the Music Vs. Club at Stern College for Women.

Tova looks forward to the events, knowing that just by visiting, she is able to make a difference. “Whether or not a student felt they connected well with a particular patient, everyone leaves knowing that they have uplifted the days of these patients and made their lives a little brighter,” she said.

Tova recalled how grateful she was when various visitors, many of whom were singers and musicians, came to visit her 90-year-old grandfather, a Holocaust survivor, when he broke his hip. “It was an opportunity to express my appreciation to all those who helped my grandfather for so many years and pay forward their tremendous acts of selfless kindness.”

A typical Music Vs. event – which can take weeks to plan and prepare for – features a group of students performing several songs, either of the Jewish tradition, related to an upcoming holiday or of a patriotic nature. Often, there is musical accompaniment as well.

“We generally try to get as many musicians as possible,” said Levi, who plays the guitar. “However, our goal is less to act as musicians and more to act as friends, using music as an ‘icebreaker’ of sorts. Therefore, we allow anyone to join our Music Vs. missions.”

Following the performance, students hold a meet-and-greet with the patients. The initial event is followed by more intimate visits. “Music slowly becomes a secondary part of our program as we forge a foundation for long-term relationships,” Mark explained. “By mobilizing students nationwide to reach out to others, we hope to ennoble the younger generation and thereby rekindle people’s faith in themselves, and consequently, in their fellow human beings.”