Names, Not Numbers is Dedicated to Preserving the Memories of Holocaust Survivors for Future Generations

2018 marks the 13th year that Names, Not Numbers INC©, the celebrated documentary series created by Tova Fish-Rosenberg where students produce documentaries of interviews with Holocaust survivors, will be offered at both the Samuel H. Wang Yeshiva University High School for Girls (Central) and the Marsha Stern Talmudical Academy/Yeshiva University High School for Boys (MTA).

In Names, Not Numbers, teams of students are partnered with Holocaust survivors who have agreed to be interviewed for the project. Over the course of the school year, the teams research both the biographies of their interviewees and the historical period in which they lived. They then use the information as the basis for the interviews, during which the team members run the state-of-the-art video and recording equipment and act as the interviewers. The teams will take the raw footage, which usually runs about 1½ hours, and, with the help of a professional editor, refine it into 20-minute documentaries. 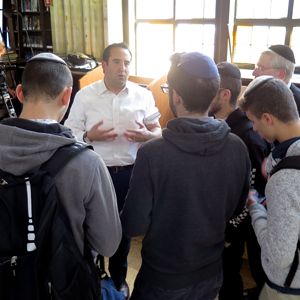 On Thursday, October 18, students at both Central and MTA received expert tutoring in how to conduct their interviews by Jonah Kaplan, currently an investigative reporter with ABC11 Eyewitness News. Kaplan began his journalism career with ESPN and YES Network, moving on to work with ABC, NBC and CBS News as well as CNN and MSNBC. He is a two-time Emmy nominee and has been awarded prizes for his coverage of the 2016 election and for producing a five-part series called “Journey to Jerusalem” with the late 60 Minutes correspondent Bob Simon.

YU News caught up with Kaplan at MTA as he met with over 40 young men to discuss the interviewing techniques they can use when they meet with their interviewees later in the school year. He agreed to speak with them because he was already an enthusiastic supporter of the project. Last year, he was invited by his alma mater, Golda Och Academy in West Orange, New Jersey, to come back and speak to the students there. While at the Academy, he had the chance to watch the Names, Not Numbers documentary. Inspired by what he saw, he contacted Rosenberg and immediately offered his services.

He began by setting out for his audience a broad view of the task they had undertaken. “You have been blessed,” he said, “with this chance to learn history, to hear history and to witness history. As journalists, because that’s what you are, you are now putting together what people will see years from now. It’s up to you to record what you’re hearing and what you’re learning, and it’s up to you to communicate what it is that you’ve learned.” He pointed out that future generations who will never have the chance to meet a survivor of the Shoah will nevertheless be able to encounter them through the work that they will do. “Think about the responsibility that you have. You have the power to provoke the kind of answers that you think are the most important and vital for people in the future to listen to and to learn from.”

The most crucial task they have to accomplish, before they undertake any of their research, interviewing and editing, is to pose and answer an important question: “So what?” “When you go into an interview, you have to figure your ‘so what?’: What’s the point of the interview?” It can’t be just about presenting facts because “you could find facts in a textbook, but what you can’t find in a textbook is emotion or the senses. Only the survivors can tell us what they saw when they walked off that train. What it smelled like in their barrack at Buchenwald. Or what the sound of their mother’s voice was like. Or what the feeling of liberation was. Or what were they most scared of during liberation. There are so many questions to ask that are not answered in texts. And that’s the power that you have.” 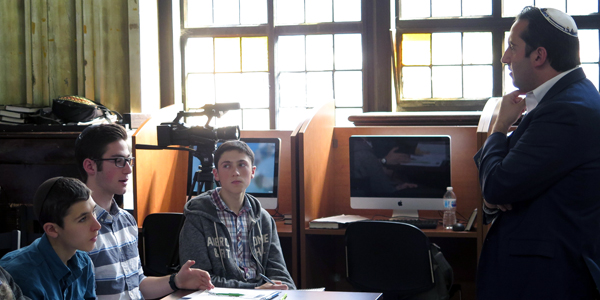 Kaplan showed them three videos of his work to illustrate the techniques he wanted them to use.

The first concerned gaining the trust of the interviewee: “How do you make a connection with a person that you’ve never met before and of whom you’re going to be asking personal questions about the most traumatic moment in their life, emotions that are locked away in a cave in their hearts?” To do this, Kaplan said, the interviewer must find ways to humanize the situation.

This can be done even before the formal interview begins. For example, as the crew sets up the equipment is a good time to establish some parameters and expectations for the meeting, such as “If I cut you off, it’s not because I’m not interested, but we have a time constraint” or “If I ask you to repeat yourself, it may be because I didn’t hear it or didn’t understand.”

Also, as the crew does its work, “make sure you’re schmoozing your person: Ask them what they like. Compliment them. Find what you have in common with the person.”

Kaplan added, “And don’t forget to thank them in advance for what they are about to do.”

Second, don’t ask questions with limited answers but phrase questions that allow the interviewee to reflect and remember. “Don’t ask ‘Were you scared?’,” Kaplan explained, “but, instead, ask something more specific: What were you feeling when…. How did you deal with the fear of…. What was your reaction to…. It’s remarkable how that kind of specificity may help your survivor remember even more than they think can remember; potentially, you’re also helping the survivor to perhaps find some shalom [peace] in their hearts, helping them breathe, helping them mourn.”

Third, don’t be rigid. “Don’t presuppose the interview, and absolutely ask follow-up questions—you’ll be amazed at what they will recall. Sometimes you don’t even have to ask a question but just make a simple statement, such as ‘That must have been traumatic’—and then you wait. The survivor may pause for a second. The survivor may cry. Let them. Let the situation breathe. Let them open up. The questions you ask can provoke things to move in directions that you don’t expect, and so you’ll have to read the situation and go with the flow. If it’s really engaging, don’t force yourself to move on. Keep going until it answers your ‘so what?’”

He ended by likening what they are doing to archaeology. “In this archaeological dig, you’re digging down deep, enabling them to open up deep into their memories and maybe talk about things that they haven’t discussed with their own children. But you have to be very careful because what you find is extremely fragile. So, you have to find that balance between provoking strong answers but also not forgetting to humanize them and make that personal connection.”

Names, Not Numbers INC© is an interactive, multi-media Holocaust project created by educator Tova Fish-Rosenberg. To date, 6,000 students have interviewed and filmed 2,000 survivors and World War II veterans throughout the United States, Canada and Israel as part of the project. All 200 documentary films Names, Not Numbers has produced have been accepted into the archives of the Jewish National and University Library of Israel at the Hebrew University of Jerusalem. In addition, they are being archived at Yad Vashem and the Mendel Gottesman Library at YU. 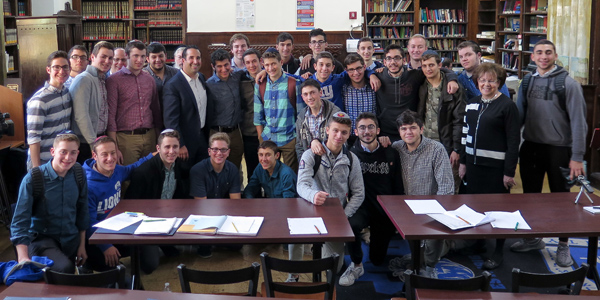