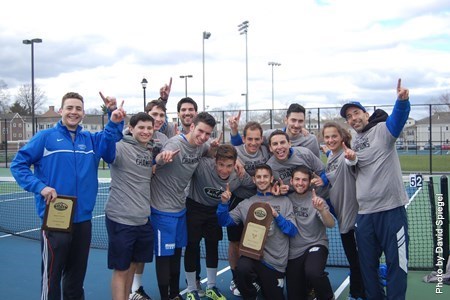 April 27, 2014 is now a date marked in history for Yeshiva University’s athletics department. Yesterday the men’s tennis team became the first program in the history of the College to earn the right to represent the school in a National Collegiate Athletic Association tournament. The team earned the berth after the Maccabees beat Mount Saint Mary’s College (MSMC) 5-1 in the championship round of the 2014 Skyline Conference postseason tournament to earn the conference’s automatic berth into the NCAA Division III playoffs.

Yeshiva will square off on either May 8 or 9 in the opening round of the nationwide championship. The Maccabees will find out who they play on Monday, May 5 during the NCAA’s men’s tennis Division III selection show.

“It is a privilege to coach such a fine group of young men who were so willing to buy into a major commitment to improving and winning.  It’s a thrill to see their hard work pay off and their genuine desire to excel come to full fruition in such a dramatic way,” said Yeshiva head coach Ira Miller. “I told them after the match to take a moment to realize that they are not only tennis players, but they are now champions.  It was made that much sweeter to be part of such an historic moment and be the first NCAA representatives in the history of their university.”

Yeshiva opened the match by losing its first doubles bout as the team of Charles Saka and Avi Seidman lost 8-0 at the No. 3 position to Dan Witke and Kevin Ryan of MSMC. The Maccabees tied the score moments later when Skyline Conference Player of the Year Igal Mostkov and second team All Conference member Steven Jemal  teamed for an 8-4 win at No. 1 doubles against Greg Jacob and Nate Dimmie. Then Yeshiva went ahead 2-1 when first team All Conference member Dmitri Lebedyev and Jeremy Seftel won 8-4 at No. 2 doubles against the MSMC team of Mike Balokoz and Gavin McNulty.

The unfinished matches included No. 3 singles that saw Balokoz ahead of Jemal 6-4, 3-2, No. 5 singles where Saka and McNulty split the first two sets and McNulty leading the tiebreaker 3-0, and No. 6 that saw MSMC’s Connor Bean beat Robby Rubin in the first set 7-6 (7-5).

“I am so unbelievably proud of these student-athletes. These guys worked hard all season and made Yeshiva history by being the first team to ever win the NCAA automatic qualifier,” said Yeshiva Director of Athletics Joe Bednarsh. “This is the culmination of eight years of hard work from all of the staff that have come through the athletics office one of my proudest moments as athletic director. I truly believe that this is just the first of many to come.”

Before the NCAA tournament, Yeshiva has one more regular season match, and the Maccabees will face Pratt Institute on April 30 at the Billie Jean King National Tennis Center at a time to be determined.