This past week the Straus center launched a new bi-weekly seminar for the Beren Campus Straus Scholars given by the director of the Straus Center, Rabbi Dr. Meir Soloveichik.

The first work being addressed in the seminar is Rabbi Joseph B. Soloveitchik zt”l’s famous speech Kol Dodi Dofek. Rabbi Soloveichik began by setting the familial background and historical context and import of the speech. He noted that to be properly understood, Kol Dodi Dofek must be read in conjunction with another speech delivered by the Rav during the same time period called Ma Dodech Midod. Ma Dodech Midod was a eulogy for the Rav’s uncle, which served more broadly as an ode to the legacy of the Brisker style of learning from the Rav’s upbringing. Rabbi Soloveichik stressed that the Rav’s embrace of Religious Zionism was a bold shift considering his family’s previous stance on Zionism, and that Kol Dodi Dofek traces the ideational foundations of that embrace.

Addressing the work directly, the discussion turned to the Rav’s distinction in the opening of the work between a People of Fate and a People of Destiny as well as the problem of evil. Drawing from a third essay of the Rav, “Catharsis,” Rabbi Soloveichik stressed that the Jewish concept of a hero is one who has a meaningful response in the face of suffering. This powerful ending note served as an introduction for the upcoming chapters, which will be addressed in future seminars. The Straus scholars eagerly await the next installment of this exciting series! 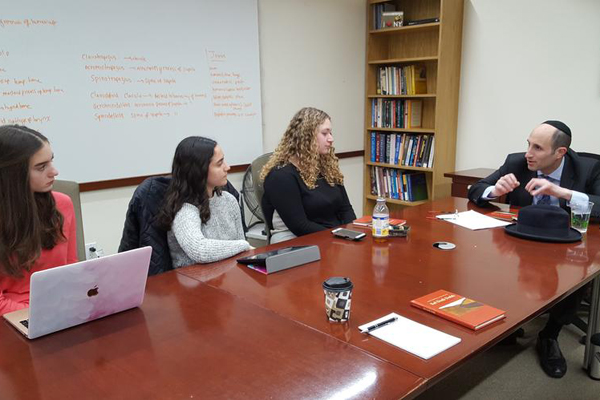