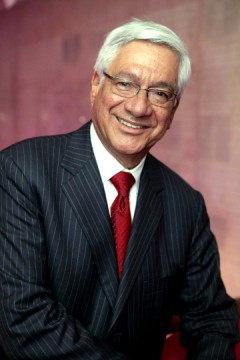 Yeshiva University has announced that Murray Laulicht of Bal Harbour, Florida, and West Orange, New Jersey, has been elected the incoming chair of the Board of Overseers of Stern College for Women. Laulicht graduated from Yeshiva College in 1961 and from Columbia University School of Law, where he was first in his class, in 1964. In 2010, he received an honorary doctorate degree from YU at the Hanukkah Dinner. A past president of what is now the Jewish Federation of Greater MetroWest and past chair of the New Jersey Commission on Holocaust Education, Laulicht has served on the Stern College Board for more than 30 years.

“I’ve been a great fan of Stern for almost all of the 60 years since its founding,” he said.  “Stern gives Jewish women opportunities to do just about anything they would like to do with a Jewish background and Jewish knowledge.

His ardent support of Stern goes back to his mother, Esther, and the founding of the Bais Yaakov schools by Sarah Schenirer in 1917 in Krakow, Poland. Schenirer’s efforts to give Jewish girls a Jewish education were radical in their day. But, thanks to her mother, who also believed in Jewish education for women, Laulicht’s mother was one of the first students to attend the Bais Yaakov school.

Esther’s father was an American citizen, which in those days also made her an American citizen, even though she was born in Poland. “Her American citizenship made it possible for her to leave for the United States in 1940, when she was pregnant with me,” Laulicht stated. “Unfortunately, the U.S. State Department insisted that my father apply for a visa in person at the American consulate in Berlin, an impossible task for a Polish Jew. Tragically, my father was murdered in the Holocaust.”

Last summer, as he was completing his book about his parents, Yearning to Breathe Free, My Parents’ Fight to Reunite During the Holocaust, Laulicht made a return trip to Krakow and visited the building that had housed the Bais Yaakov school. There he saw a bronze plaque inscribed with these words: “A spark kindled in Krakow grew to a flame that radiated throughout Poland and across the oceans. This light of Torah continues to illuminate the hearts and minds of Jewish girls throughout the world.”  He saw a striking similarity between what the school in Krakow had done for his mother a century ago and what Stern College does for its students today.

“Stern has established a beautiful beit midrash for women, thus taking the original teachings of Sarah Schenirer to a new level,” he noted. “After having worked on my book for a long time and finally publishing it, I realized that becoming the chair of the Stern board was an almost perfect job for me.”

“At Stern College we have a terrific product, and I want to make sure that people know about it.” To prove his point, Laulicht rolled off a series of statistics that Dr. Karen Bacon, The Mordecai D. Katz and Dr. Monique C. Katz Dean of the Undergraduate Faculty of Arts and Sciences, had presented at the commencement in May: a 100 percent acceptance rate for applicants to dental school and law school, and more than 90 percent for medical school, as well as many women graduating as Judaic scholars or continuing their studies in a wide range of health care fields. “I really think educating Jewish women is among the most important tasks any Jewish community can have. To be part of that, maybe even to play a significant role in that, is like a dream come true.”

Board of Overseers, Murray Laulicht, Stern College for Women