Since its inception a decade ago, Yeshiva University’s Azrieli Graduate School of Jewish Education and Administration has pioneered serious research in Orthodox Jewish day schools in North America. The Azrieli Papers: Dimensions of Orthodox Day School Education, the school’s first volume of collected works, published by the Michael Scharf Publication Trust of Yeshiva University Press, showcases that research—in areas as critical and varied as educational psychology, differentiated instruction and school infrastructure—for an audience that includes parents and lay professionals as well as academics. 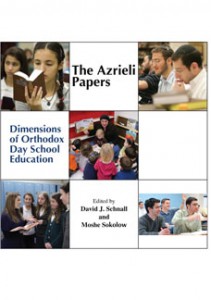 “We anticipate that this book will be a valuable reference tool in our own classes as well as in academic and professional programs elsewhere,” said David Schnall, dean of Azrieli and the book’s co-editor, whose contribution compares the right to an education in Jewish tradition and in American constitutional law.

“It is also intended as a reference tool for educators and school leaders, “added Schnall, “as well as for those involved in cognate institutions of Jewish education such as summer camps, youth programs and synagogues. Because of its readable style and focus on practice, parents of day school students would likely benefit from many of the articles and the expertise they represent.”

Some individual works in the Azrieli Papers were originally published as a special issue of Tradition magazine and place a heavy emphasis on the combination of theory and case studies. The mix is rare in a field which until recently has offered few hard facts or numbers for scholarly analysis. Made possible with the support of Henry and Golda Reena Rothman, the book is divided into sections using unique and creative resources to discuss topics as diverse and substantive as school structure, student psychology, educational philosophy and curriculum.

For example, a chapter by Dr. Lawrence Schiffman, a world-renowned expert in the Dead Sea Scrolls and Vice-Provost of Undergraduate Education at YU, examines the use of advances in archaeology as a tool for teaching Jewish studies. Azrieli’s holistic view of student-centered education is also highlighted in chapters by Dr. David Pelcovitz, Gwendolyn and Joseph Straus Chair in Psychology and Jewish Education at Azrieli, regarding at-risk behavior in children, and Dr. Rona Novick, University Professor in Education, about positive school culture and the problem of bullying in day schools.

“This book represents the confluence of theory and practice,” said Dr. Moshe Sokolow, associate dean at Azrieli and co-editor, whose chapter demonstrates the use of Rabbi Joseph B. Soloveitchik’s writing in developing a day school curriculum for tefillah [prayer]. “Jewish education can be improved,” Sokolow noted, “through research and development. Azrieli is uniquely situated to advance it in this way because our faculty and students engage both in practice in the field as well as research and theory.”

“One of the charges in writing The Azrieli Papers is the importance of combining serious practice with research,” said Dr. Jeffrey Glanz, Raine and Stanley Silverstein Chair in Professional Ethics and Values at Azrieli. “We’re trying to be practical for practitioners, teachers, counselors and rebbeim, but we want to show people there is also research and serious quality academics behind it.”

Glanz’s contribution is a game-changing piece about inclusion theory. It argues for the integration of students of all abilities in one class room, from the gifted to those with special needs, contrary to the prevailing belief that different environments are needed to educate students of differing levels.

“In our society we separate students who are not the norm,” said Glanz. “Children with mild retardation or autism, for example, are often excluded, and other children are not exposed to them. An inclusive model, both philosophically and practically, overcomes those prejudices. The extent to which we can mainstream students in the class and school is to benefit to all students and is the morally right thing to do.”