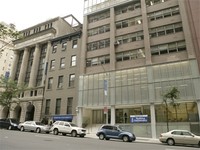 Sep 11, 2007 — Thanks to a new eruv (Sabbath boundary marker) in Midtown Manhattan that includes Stern College for Women, students and visitors to the Beren Campus can now carry books, keys, and food, and push baby carriages and wheelchairs on Shabbat, which all amounts to a more relaxed Shabbat experience.

According to Halakhah (Jewish law), one can carry items outdoors on the Sabbath only if the act of carrying occurs within a proper enclosure. For observant Jews, the restriction means that individuals do not carry anything in the public domain—even articles of clothing they are not wearing or babies who cannot walk.

“Eruv,” short for “eruv hatzerot,” literally means “the unification of properties,” and is a halakhic solution to the problem of not being able to carry on Shabbat beyond private property.

“As the Beren Campus has expanded, it became clear that we needed to make it possible for students and guests to move comfortably from building to building, taking whatever they needed with them,” said Karen Bacon, PhD, The Monique C. Katz Dean of Stern College.

The eruv is an extension of the existing eruvs on Manhattan’s Upper West and Upper East sides (which are all now connected). The Midtown eruv runs along the southern side of East 56th Street from (but not including) Franklin D. Roosevelt Drive to the eastern side of Sixth Avenue, reaching down to Houston Street on the west side and zigzagging through Alphabet City on the east side. Areas around the United Nations and Alphabet City are not included in the new eruv.

Erecting an eruv involves putting up a wire cable although in some places an existing wall or fence will substitute. The Midtown eruv was constructed in consultation with Mechon L’Horaya, a respected rabbinical court in Monsey, NY, which now oversees its weekly maintenance.

“This is a very technical issue in Jewish law. There is a whole tractate in the Talmud that deals with it,” said Rabbi Gideon Shloush ’93Y,R, rabbi of the Murray Hill-Gramercy Park community and spiritual leader of the nearby Congregation Adereth El where many Stern students pray. He organized the construction, supervision, and fundraising for the project with Rabbi Yehuda Sarna of New York University’s Hillel–Bronfman Center for Jewish Life, whose community is also included in the new eruv.

The process also involved getting permission from New York City authorities. “In a big city such as this, there are a lot of complexities in erecting the wire so as not to interfere with city life,” Rabbi Shloush said. “You cannot, for example, construct an eruv running through Herald Square on 34th Street because the Thanksgiving Day Parade runs through there and the balloons could get caught on the wires.”
The eruv, completed during the summer, enhanced Stern’s first Shabbat this fall semester.

“It’s so freeing,” said Zelda Braun, associate dean of students at Stern. “We now have families coming who couldn’t have come before.”