It’s the only book in the Bible to omit all mention of God, the Torah and the land of Israel. Aside from Genesis, it’s also the most written-about biblical work in the Talmud. Throughout the ages, the unique tension in the Book of Esther has made it one of the most fascinating books in Jewish tradition, and also one of the most deeply complex. On March 10, in honor of the upcoming festival of Purim, scholars from schools across Yeshiva University came together to discuss those complexities and their implications for Jewish thought and experience.

“Part of the experience of this evening is experiencing the richness, depth and range of perspectives that YU offers on these fascinating topics,” said YU Museum Director Dr. Jacob Wisse, who moderated the panel, at the beginning of the night.

The panel was partly inspired by the recent publication of Koller’s book, Esther in Ancient Jewish Thought (Cambridge University Press, February 2014), which highlights the political character of the book of Esther but also discusses the broad range of reactions to it within the rabbinic Talmudic period. Koller shared the main themes of his work with the audience, illustrating ways in which Talmudic sages and commentaries sought to find divine oversight and messages of faith in a book that never mentions them overtly.

“For rabbinic tradition, it’s important to have a divinely-centered explanation for the ups and downs of the book, whereas the megillah [story] itself leaves it totally in the realm of coincidence, accidence or just the nature of exilic life,” said Koller. “For Jews around the world, there’s always been a lot of power to Megillat Esther because it describes a world where God might be behind the scenes, but we can’t see Him operating there. There’s a lot in Esther that becomes the blueprint for Jewish reflection on religious, national and political life.” 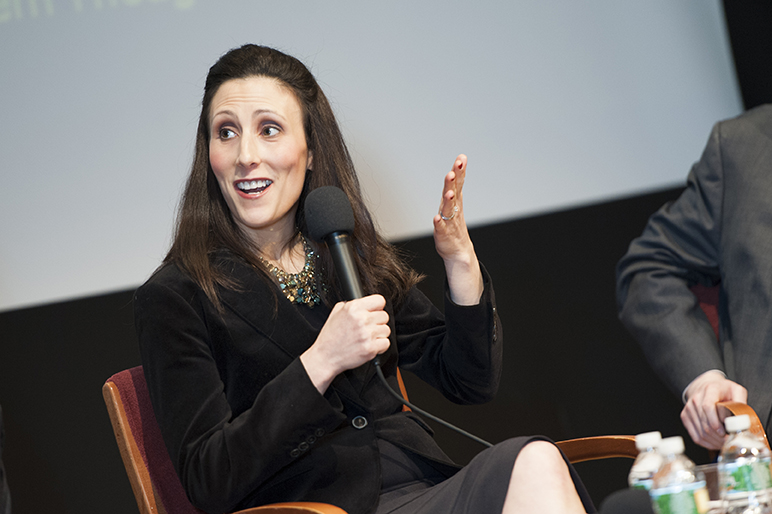 Koller also noted that his own work on the Book of Esther emerged from an undergraduate class he had been teaching at Yeshiva College. “It was a typical YU undergrad class—very strong, energetic and motivated students,” he said. “I never had an intention to conduct research on Esther professionally, but during the course, a number of interesting points came up, and the whole class contributed strongly to the development of the ideas. They actually read an early draft of the book and gave me feedback.”

Leibowitz focused on the roles of women and men in Esther and the ways in which the established male power dynamic is subverted in the book. “We look at narratives in our history for a lot of reasons—their historical value, their theological implications—but one of the things we begin to appreciate when we look at biblical narratives is the issues that the people within them struggled with,” said Leibowitz. “What we can identify is the way stories about individuals really speak to and answer questions that resonated with the nation as a whole, that spoke to their preoccupations and fears. The story of Esther is no different: Over the course of the megillah, Esther is able to transform herself into someone who is not only able to call the shots when she previously had no power, but to create a safe, meaningful place for herself within this foreign empire as well as her entire nation.”

Anchoring the book in the cultural context of Jews living in Persia at Esther’s time and long afterwards under Muslim rule, Tsadik painted a picture of a complex Jewish-Islamic relationship. “Under the protection of sharia law, Jews and Christians were safe—their lives and property were secure,” said Tsadik. On the other hand, they were also heavily taxed, forced to wear distinctive clothing that made them easily discernible from Muslims, and considered impure, second-class citizens. Nevertheless, Tsadik noted, “Iranian Jews were and are very much Iranian. They have very Iranian names, they celebrate Iranian festivals, and they were very much involved in Iranian society.”

Soloveichik spoke about the special place Esther has occupied in the hearts of exiled Jews throughout history, particularly the message of Jewish loyalty it conveys in the rabbinic tradition. “This is a sefer [book] that presents to us a life of Jews in Diaspora, but it’s the sefer where the word ‘yehudi’ [Jew] is used most often,” he noted. “It’s absolutely true that there’s so much that’s striking and seems subversive in it—Jews in exile, no mention of God or the Temple—but that’s precisely the point. The text removes theology to make a theological point that when the divine seems absent and the incentives for Jewish loyalty are nowhere to be found, the metaphysical bond between Jews can make itself manifest, and it’s in that bond that God can be seen.”

Abraham Shapiro ‘58YC attended the event with his wife to “fill in the gaps in the megillah.” “We wanted to hear things about Esther we haven’t heard before and correct our misconceptions,” he said. “This gives you a perspective on the University as well. It goes so much beyond just offering classes for its students.”

Moshe Peters ‘12YC had been a student in Koller’s course and was excited to hear him speak about his work. “As a teacher, he’s fantastic,” Peters said. “I think Esther is a fascinating book that’s shrouded in so much mystery—everything is hidden—and having these diverse perspectives is so valuable. Events like this are always amazing in terms of bringing different voices into dialogue with each other—you always learn something.”