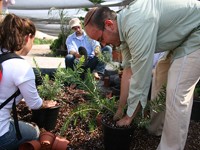 Sep 12, 2007 — For 12 women and nine men who participated in Yeshiva University’s Jerry and Mary Swartz July in Jerusalem Program, run for the first time this past summer by the university’s Mechinah Program for men and Basic Jewish Studies Program for women and open to college students from across the country, an intense experience studying Torah and exploring Israel proved rewarding in many ways.

“My religious beliefs grew much stronger,” said Esther-Naomie Kadoch, a Stern College for Women student from Morocco who participated in July in Jerusalem. “The opportunity to touch and see with my own eyes what I have learned in the pages of the Five Books of Moses was inspiring.”

For Mathew Bernstein, who is studying pharmacy at the University of Florida, the daily educational activities strengthened his commitment to Jewish leadership. “They introduced me to the intellectual part of our heritage,” said Bernstein, “and the many trips we took to different parts of the country connected me to Israel, its rich history, and it current goals and struggles.”

The July in Jerusalem Program was sponsored by Mary Swartz, who underwrote it in memory of her late husband, Jerry, a businessman and Jewish philanthropist. The program was conceived on the basis that “as much growth as a person might have over the course of a year, an intense summer of study in Israel could bring a person to another level of connection,” said Rabbi Zev Reichman, director of YU’s Mechinah Program.

For many of the students, the program was what coordinator Shoshana Levine Schechter described as “a life-altering experience.” Schechter, who teaches Bible studies at Stern and coordinates the Basic Jewish Studies Program for women there, said the program enriched the academic aspect of learning with real-life experiences.

After classes at the YU in Israel Campus in Jerusalem, the students visited a children’s home and interacted with disadvantaged youngsters, served food to the hungry at a soup kitchen, and helped a woman whose husband was killed by a suicide bomber establish her greenhouse. They spent Tisha B’Av, a day of fasting in the Hebrew calendar, in the Old City of Jerusalem, and celebrated Shabbat in the Jerusalem and Safed.

“It was an important, even pivotal, time in the lives of many of the students,” Schechter said, “an occasion to gain an appreciation of their Jewish identity.”