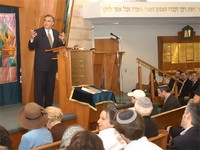 His 90-minute lecture, DARE TO DREAM: Unlocking the Power and Potential of Torah Umadda, expanded on themes that have dominated the president’s first 12 months in office—nobility of purpose in education, community-building, the centrality of Israel, and academic excellence. He emphasized his belief that students should use education and Jewish ethical values to improve society through meaningful action.

In promoting a more activist approach to Jewish learning, President Joel spoke of a “yeshiva without walls,” with distance-learning, traveling Torah seminars, extension kollelim, and other similar initiatives intended to expose many more Jews to Yeshiva University programs and courses.

He pledged to make YU’s undergraduate schools—Yeshiva College, Stern College for Women, and Sy Syms School of Business—“schools of choice and sources of pride,” adding that “YU is not Harvard, but that Harvard will never be Yeshiva University.” Making Yeshiva University special, he added, demands an inclusive academic environment in which students and faculty feel important and appreciated.

“How can we foster a community that’s happier and healthier?” asked the president, describing YU students as “our clients.”

Other initiatives and ideas discussed included the establishment of 11 graduate fellowships and the need for more varied Israeli programming and course offerings, including classes in Arab-Israeli relations and Middle East politics.

Describing academic excellence as a means to inspire students and prepare them for leadership in the Jewish community and beyond, the president pointed to efforts underway to improve and expand in-service training to produce more quality Jewish educators, administrators, and professionals.

To that end, he announced the hiring of David Pelcovitz, PhD, the director of psychology at North Shore University Medical Center and clinical associate professor of psychology at NYU School of Medicine, author, as well as a leading authority on parenting and other child-related issues.

Dr. Pelcovitz will join the faculty of YU’s Azrieli Graduate School of Jewish Education and Administration and teach courses on developmental psychology and on psycho-social issues in the Jewish community. He will continue to teach courses on counseling and family education in the Wexner Program at YU’s affiliated Rabbi Isaac Elchanan Theological Seminary.