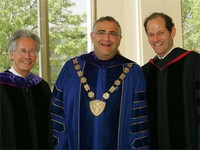 Jun 10, 2005 — New York State Attorney General Eliot Spitzer encouraged the class of 2005 to follow their hearts and not be afraid to question the system, in his commencement speech for Benjamin N. Cardozo School of Law of Yeshiva University.

In introducing the Attorney General, who is well known for investigating conflicts of interest and illegal practices, Dean David Rudenstine said Spitzer has been compared to legendary figures King Arthur, Superman, and Batman, and has been called the “sheriff of Wall Street.”

During an inspiring commencement address, Spitzer told the students to work hard and be ambitious, but to also help restore the public’s trust in institutions we all depend on. “There will come a time in your careers when your ethics will be tested,” Spitzer said. “I urge you to speak the truth in your heart.”

Randi Weingarten, a 1983 Cardozo graduate and president of the United Federation of Teachers (UFT), received the third annual Distinguished Alumna Award for Contribution to Public Service. As head of the UFT, Ms. Weingarten represents more than 140,000 educators in the New York City public school system and also leads the Municipal Labor Committee, an umbrella organization for 100 city employee unions.

Like Attorney General Spitzer, she encouraged the graduates to fight for their beliefs and challenged them to make a difference. “This law school gave you the wherewithal not to just dream your dreams, but to achieve them,” Weingarten said. “Please leave our city, our country, and our world in a better place than you found it.”

In a speech on behalf of the class of 2005, graduate Kavin Edwards reflected on his time at Cardozo, noting that the Law School is known not only for its intellectual vigor, but also for its “human touch.” He urged his classmates to represent Cardozo well and “act in a manner that demands respect. “We’ll see you on the other side of greatness,” Edwards said.

Yeshiva University President Richard M. Joel conferred the degrees upon the graduates and told them: “It’s all about tomorrow, and tomorrow is yours.”