On Monday, Nov. 5, an attentive and respectful audience of students and staff from the Wilf and Beren campuses gathered in the Rubin Shul to listen to a talk by Norbert Strauss titled “My Life Under the Nazis: 1933-1941” as part of the annual commemoration of Kristallnacht organized by the Student Holocaust Education Movement (SHEM). 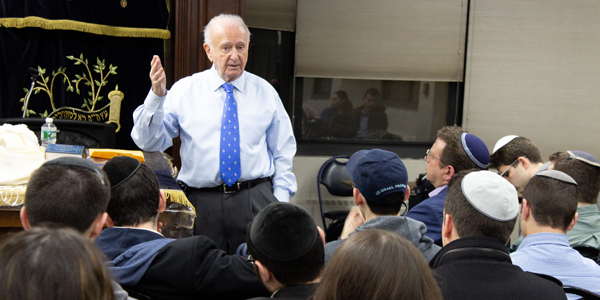 In a matter-of-fact but forceful style, Strauss told the harrowing story of how Kristallnacht triggered his family’s eventual escape from Germany to the United States, a journey filled with terror and pain but also shaped by unexpected kindnesses and unpredictable good luck.

On the night of Nov. 9, 1938, and crossing over into the next day, Reich Minister of Propaganda Joseph Goebbels used the murder in Paris of an embassy official, Ernst vom Rath, by Herschel Grynszpan, a Polish Jew, as a pretext to launch a pogrom against Jews in Germany, Austria and the Sudetenland.

Over the next two days, hundreds of synagogues and prayer rooms were destroyed, thousands of homes and businesses were ruined (including the kosher family restaurant in Frankfurt owned by Strauss’ uncle), Jewish cemeteries were desecrated, and tens of thousands of German males were sent to Dachau and Buchenwald; Strauss’ father and uncle were sent to the latter camp.

Shortly after Kristallnacht, Germany set up conditions for the men to gain release from the camps if they could meet certain criteria, which the father and uncle did (though it took longer for the uncle to be freed): they had been front-line soldiers during World War I, they agreed to sign over all property and insurance policies to the German government (thus forfeiting their assets) and consented to leave the country in six months.

Strauss’ father managed to gain passage on the St. Louis with 900 other Jewish refugees, only to have the ship turned back from landing in Cuba or the United States by the governments of both countries.  After the ship returned to Europe, docking in Antwerp, the father was interned in a detention camp in the Hague, where he managed (Strauss was not exactly sure how) to obtain a visa and booked passage to the United States. Strauss called it a neis min hashamayim [miracle from God].

His mother, alone with Strauss and his brother, managed to get plane tickets on Lufthansa through the unexpected help of a German police officer who took their money and booked their flight without betraying them to the government. They flew from Stuttgart to Barcelona, where the Hebrew Immigrant Aid Society helped them move on to Madrid and then to Lisbon; from there, they sailed to New York.

In America, Strauss lived a full life, doing such things as serving in two armies (the American, fighting in Korea, and Israeli during the Second Lebanon War) and having a successful 36-year career with the international commodities trading firm Philipp Brothers, retiring in 1986.

The audience members had many questions for him. One asked him if he had ever traveled back to Germany and, if so, how that felt.

“I have never felt comfortable being back in Germany,” he noted, “even when I took my family to show them where I had lived. I was always glad to leave Germany.”

Did he have any guilt about Israel accepting reparations from Germany? “I have nothing against taking money from anybody. Money is fungible. It’s not German money, it’s money, and if it can help Israel, by all means, take it. I don’t have a problem with that.”

One student asked if he thought that what happened in Pittsburgh at the Tree of Life Synagogue was reminiscent of what happened to him in Germany. “I don’t think so. You have to remember that anti-Semitism started to become bad because the government was anti-Semitic. The United States government is not anti-Semitic, and I hope it never will be. I’m optimistic that it won’t, and I think we are safe here.”

Has he ever talked to a Holocaust denier? “No, I don’t want to see them, and I don’t think they want to see me.”

He ended the evening with a simple declaration about why he continues to tell his story in his speeches and his writings. “Why do I speak? I’m the last generation that can speak from their own experience. When I am gone, my stories are gone. To hear from the person who experienced it is worth a thousand times more than reading it in a book. I talk because it is important to remember the Holocaust. It is important for you to remember and to pass it on to your friends and, when you get married, pass it on to your children, because if you don’t, it will be forgotten.”

Yosef Sklar ’19YC, one of the co-presidents of SHEM (the other being Avigayil Adouth ’18S), was very pleased with the event. “We were very happy both with the student turnout as well is with student engagement at the event. It was great to see so many attendees participate in the Q&A and go over to Mr. Strauss personally after the lecture to further interact with him. It is these personal, face-to-face encounters with Holocaust survivors that is invaluable and that we hope to continue to organize for as long as we can.”