American health care is facing its most comprehensive overhaul since 1965, and everyone from doctors to patients to employers will be affected. Often referred to as “Obamacare,” the Patient Protection and Affordable Care Act (PPACA) became one of the most contested topics in this year’s presidential election, and its political, financial and ethical implications are still widely debated. On November 26, Yeshiva University’s Student Medical Ethics Society sought to debunk the myths and misconceptions about the controversial health care bill at an event that provided students with a practical walkthrough of the complex bill and analyzed it through the lens of ethics and halakha.

Titled “Obamacare: The Enigma Unveiled,” the event began with a crash course in American medical history by Dr. Kevin O’Halloran, a senior resident at the Montefiore / Albert Einstein College of Medicine Department of Orthopedic Surgery who recently published a review article on Accountable Care Organizations (ACOs), a facet of PPACA. O’Halloran highlighted the factors that set the stage for health care reform in 2010, noting that more than 16 percent of the population was uninsured that year, private and public health care expenditures in the United States had totaled more than 15 percent of the country’s GDP, and America ranked seven out of seven developed countries for “quality, efficiency, access, equity and healthy lives” according to the Commonwealth Fund.

He compared the passage of PPACA to a “patch” being released for a “glitchy” computer program. “Obamacare doesn’t tear down any aspect of the American medical insurance now,” he said. “It builds on what we already have.”

Speaking about the bill’s influence on the insurance industry, physicians and the average American, O’Halloran discussed clauses that called for close regulation of insurance companies’ profits and services and expanded Medicaid eligibility for the poor. He also offered students a population-based breakdown, explaining how families, pregnant women and senior citizens would be affected. 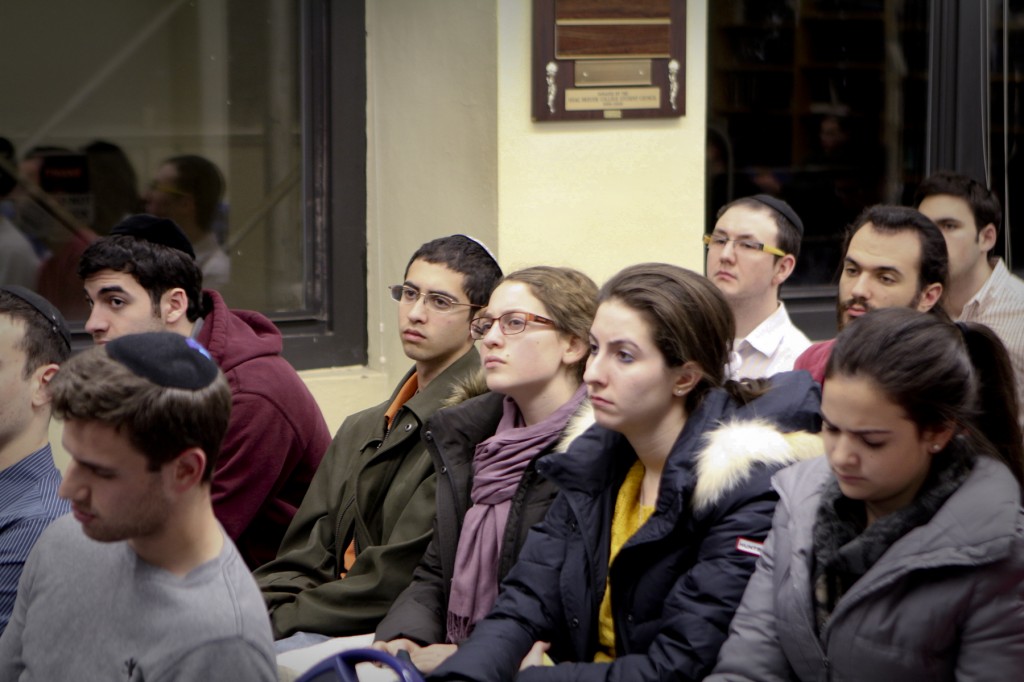 As a doctor, O’Halloran addressed a concern that is especially important to medical school hopefuls: changing physician pay and hospital funding. He focused on value-based purchasing, one of 20 new payment systems and initiatives that Medicare will try out as part of PPACA and that could be emulated by private insurance companies. “What Medicare is looking to do is institute a policy that reimburses physicians based on a patient’s outcome and sees whether hospitals, doctors and rehab centers are doing their best to help patients improve in a timely and efficient way.” O’Halloran added that these value-based payments were designed to incentivize physicians and hospitals to make more thoughtful and more innovative decisions about patient care, but the impact on physician pay was still unclear and would vary by specialty.

Dr. Herb Leventer, adjunct instructor in philosophy at Yeshiva University, took on some of the more frequently circulated fears about PPACA, including arguments that its tax increases would choke America’s already struggling economy. “This is not a job killer—it’s going to fund another million jobs in health care, because if we’re going to have more people insured, we’re going to need to provide more health care,” Leventer said. He also noted that the purpose of PPACA was not only to extend coverage to the poor, but to enhance coverage for all Americans. “We do provide the best health care in the world, but we currently provide it only to those who have lots of money or good insurance. About half of our country has neither.

“In the United States we have two stereotypes about how to live,” Leventer added. “There’s the mythical cowboy, the rugged individual, versus the mythical small town, where everyone pitches in to rebuild the barn that’s just burned down because they all understand it could be them one day. Much of the debate on health care reform sounds like these two myths: individual autonomy versus social solidarity, competing for the soul of our country.”

From the perspective of Jewish tradition, Rabbi Yosef Blau, mashgiach ruchani [spiritual advisor] at YU-affiliated Rabbi Isaac Elchanan Theological Seminary, turned the discussion to a Talmudic conversation about private versus public charity. “There’s a balance between individual giving and what the community sets standards for,” he said. “Although the overwhelming majority of our books were written when preventative medical care wasn’t understood at all, the same way that halahka shows concern that everyone has a minimum amount of food to eat and clothing to wear, given the ability of society to provide medical care, it would similarly set some kind of requirement to ensure that everyone gets at least that minimal amount of medical care.”

According to Chani Herzig, a junior majoring in women’s health at Stern College for Women and one of the event organizers, the discussion was a much-needed breath of fresh air for students interested in the medical field but confused by contradictory rhetoric about PPACA. “This is something which is relevant, changing, and happening now, and people need to know,” she said. “Logistically, everything is changing—the way doctors are paid, the way they enter or don’t enter into practices, the way they choose specialties—and for many of us who are considering going into any part of the medical field, it’s critical that we know what we’re talking about.”

I just want to tell you that I’m all new to weblog and truly loved your blog. Almost certainly I’m going to bookmark your website . You absolutely have great articles. Appreciate it for sharing with us your webpage.

I just want to tell you that I am just beginner to blogging and truly savored your page. Almost certainly I’m want to bookmark your blog post . You absolutely come with fabulous stories. Thank you for sharing with us your blog site.

I just want to mention I am just all new to blogging and site-building and seriously loved this page. Probably I’m going to bookmark your website . You amazingly have good article content. Regards for sharing with us your web site.

I simply want to mention I am just new to blogging and actually loved your web site. More than likely I’m likely to bookmark your website . You amazingly come with superb stories. Kudos for revealing your web-site.

I simply want to say I am new to weblog and honestly liked you’re web blog. Very likely I’m want to bookmark your blog post . You actually have exceptional well written articles. Thanks a bunch for revealing your web site.

I simply want to say I’m beginner to blogging and seriously savored your web-site. Likely I’m going to bookmark your blog post . You definitely have exceptional writings. Thanks a lot for sharing with us your website.

I simply want to mention I’m beginner to blogging and site-building and seriously savored your blog. Most likely I’m likely to bookmark your website . You amazingly come with tremendous articles. Bless you for revealing your blog site.

I just want to mention I am newbie to blogging and site-building and truly savored you’re web-site. More than likely I’m likely to bookmark your blog post . You absolutely have remarkable articles and reviews. Cheers for sharing your blog site.

I just want to say I am newbie to blogs and seriously loved this blog. Likely I’m planning to bookmark your website . You amazingly come with fantastic well written articles. Many thanks for sharing with us your website.

I just want to say I’m beginner to blogging and honestly enjoyed this page. More than likely I’m planning to bookmark your site . You really come with wonderful writings. Appreciate it for revealing your web page.

I just want to tell you that I am just new to blogs and honestly loved you’re page. More than likely I’m likely to bookmark your site . You amazingly come with tremendous article content. Many thanks for sharing with us your blog site.

I simply want to say I’m new to blogging and site-building and really liked you’re web blog. Almost certainly I’m going to bookmark your blog . You really have remarkable well written articles. Many thanks for sharing with us your web-site.

I simply want to mention I am just new to blogging and site-building and truly enjoyed this blog. Probably I’m going to bookmark your blog post . You surely come with amazing articles. Thanks a bunch for sharing with us your website.

I simply want to tell you that I am just all new to blogs and truly enjoyed this website. Very likely I’m want to bookmark your blog . You really come with good well written articles. Kudos for revealing your web page.

I just want to mention I’m new to blogs and certainly loved you’re website. Likely I’m likely to bookmark your blog post . You definitely have terrific writings. Cheers for sharing your blog.

I simply want to tell you that I’m beginner to blogging and truly enjoyed this web blog. Very likely I’m planning to bookmark your blog . You certainly come with outstanding articles. With thanks for sharing your web page.

I simply want to tell you that I am just all new to weblog and really savored this web site. Likely I’m want to bookmark your blog post . You absolutely have fabulous posts. Thanks for revealing your web-site.