A new book edited by Dr. Jeffrey S. Gurock, Libby M. Klaperman Professor of Jewish History at Yeshiva University, curates the intriguing insights of 16 senior scholars of American Jewish history as they discuss the intellectual and personal roads they have traveled in becoming leaders in their areas of expertise. 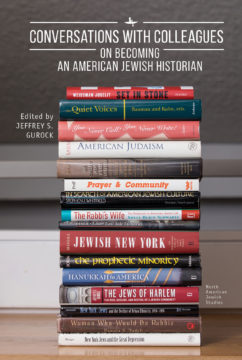 Conversations With Colleagues: On Becoming an American Jewish Historian (Academic Studies Press, April 2018) offers reflections from the men and women whose work and advocacy have moved the discipline of American Jewish history into the mainstream of academia. Through their thoughtful and candid recollections of the challenges they faced in becoming accepted academics, they retell the story of how the study of the Jews and Judaism in the United States rose from being long dismissed as an amateurish enterprise not worthy of serious consideration in the world of ideas to its position today as a respected field in communication with all humanities scholars. They also imagine and chart the direction the writing on American Jews will take in the coming era.

“Recently, American historians have become increasingly interested in understanding how varying subfields that make up what is now a very diverse discipline evolved and who the foremost scholars have been,” said Dr. Gurock. “Books on the evolution of American ethnic history and women’s history immediately come to mind. As a longtime student and scholar of American Jewish history and as an advocate for the field, I wanted to have what I and my closest colleague do ‘on the record’ for appreciation in the academy. Second, I wanted to put in writing the question that I am always asked when I am on the lecture circuit: ‘When and how did you decide to enter this area of study?’”

“As well, I wanted to pay tribute to my teachers who started me out in my career 40 years ago,” added Dr. Gurock, who is the prize-winning author or editor of 20 books in the field of American Jewish history. “I hope this book will intrigue both academics and general readers.”

“While all of the scholars assembled in this volume are well known for their intellectual perspicacity, their essays here shine light on the humanness of the scholar—the struggles and triumphs each experienced as children, young adults, students, and beyond,” said Lila Corwin Berman, Murray Friedman Chair of American Jewish History and director of the Feinstein Center for American Jewish History at Temple University.

“In many ways a coming-of-age story narrated by multiple voices, Conversations with Colleagues offers an unprecedented exploration of the evolution and structure of American Jewish history as a field,” she added. “Jeffrey Gurock’s excellent introduction serves as a guide, enabling the reader to see how each of the scholars fits into a broader set of questions about the organization of intellectual knowledge and its connection to the human beings who create those schemes of organization. Those of us in the field undoubtedly will feel humility and gratitude as we read these pieces; and for those outside of the field, whether historians, scholars or simply readers, the same stories will resonate for their warmth, intelligence, humor and remarkable self-understanding.”