On Tuesday, Nov. 5, 2019, which coincided with voting day in New York City and in many places throughout the United States, Avital Chizhik-Goldschmidt (instructor at Stern College for Women and the Life/Features editor at the Forward), Rabbi Menachem Genack (Rosh Yeshiva at Rabbi Isaac Elchanan Theological Seminary and CEO of the Orthodox Union Kosher Division) and Dr. Sharon Poczter (associate professor and chair of the strategy and entrepreneurship department at Sy Syms School of Business) came together for a discussion, moderated by Rabbi Daniel Sherman of the West Side Institutional Synagogue (a sponsor of the event), on the interplay among politics, industry, leadership and faith titled “Power, Politics and Leading a Nation.”

An audience of close to two dozen people at the JCC Manhattan (another sponsor of the event) listened attentively as Rabbi Sherman guided the conversation with incisive questions about Jewish political influence, the overlap (if any) of business and political leadership skills, the tension between democracy and capitalism, solutions to anti-Semitism, the effect of gender expectations on leadership and whether such a thing as a Jewish voice and Jewish community exists.

Notable quotes from the evening: 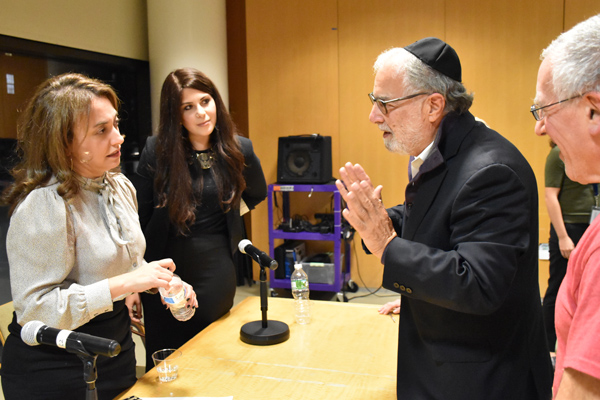 The event grew out of YU Ideas, a project of the Office of the Provost directed by Rabbi Dr. Stu Halpern, senior adviser to the Provost. Explore the online version of “Power, Politics and Leading a Nation.”