On Tuesday, December 13, students, staff and community members attended a panel discussion on what can be done to address homelessness. The event was organized by the Yeshiva College Tzedek Society, the Stern College for Women Social Justice Society, and the Jay and Jeanie Schottenstein Honors Program.

Titled “Our Neighbors on the Street,” the panel featured four experts on the topic: Dale Williams, executive director of Midnight Run, which collects and distributes basic living items to homeless individuals; Noel Concepción, department director of BronxWorks Adult Homeless Services, a human service organization and settlement house based in the Bronx; Giselle Routhier, policy director for Coalition for the Homeless, which advocates for affordable and supportive housing; and Dr. Mike Rowan, assistant professor of sociology at John Jay College of Criminal Justice, who researches the sociological and psychological aspects of crime, policing and homelessness.

Williams, who had been homeless for three years, spoke strongly about the emotional and psychic toll it takes on a person, even with something so ordinary as cleanliness. “It may be difficult for you to imagine what it’s like to be dirty, to smell,” he said, “knowing that no one wants to sit next to you.” Fortunately, he received help from Midnight Run, and once his life stabilized, he volunteered for the organization, became a board member and eventually became executive director, a position he has had for the last 17 years.

An audience member pointed out the need for feminine hygiene products also being made available so that women on the street can retain their personal dignity, and both Routhier and Concepción noted that distributing these products is now mandated in all facilities and programs dealing with the homeless.

However, taking care of the immediate physical and medical needs of homeless people does not address the root causes of the problem, and the bulk of the evening’s discussion analyzed what is being done and what needs to be done to achieve that. The short answer to these questions, according to Rowan, was, “not enough and so much more.”

He cited statistics to show that the core problem of homelessness is simply the lack of places for homeless people to call home. “The theory in combating homelessness was to get people into homes before you addressed any of their other issues,” he noted. “However, the reality is that there are just not enough spaces for people. For every family who gets a housing voucher, three more are eligible but won’t get one.”

Routhier added that the city and state, together, need to do more to fill the gap between housing availability and housing need. “But the problem is often that alleviating homelessness, while discussed and worried about, does not rise to the level of being a priority.”

Other causes for homelessness include the massive deindustrialization of the American economy, which has put families one paycheck or one illness away from economic disaster; the shortfall in mental health services; real estate pressures and the resulting evictions; and the distaste on the federal level for any public housing programs. 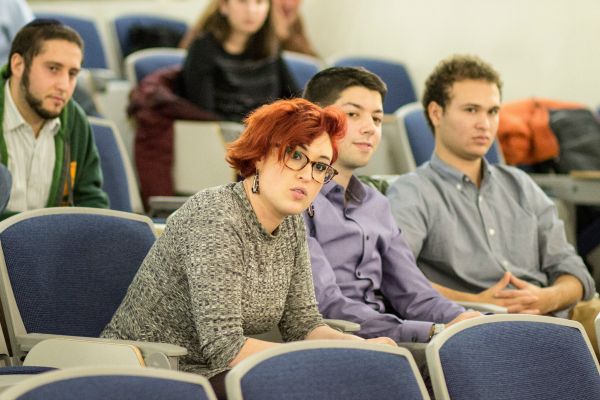 Several audience members had questions for the panelists. One student wanted to know if he should believe the signs that street people display saying that they’re homeless and need money.  “Yes and no,” said Williams. “No doubt some people are telling the truth and some people aren’t.  I usually don’t give money – granola bars are what I usually hand out, though a lot of people don’t like granola bars. The only advice I can give is that you have to follow your own conscience.”

Routhier added that there were many efforts in New York City to provide services and combat these inequalities. “It is important to get involved in these campaigns,” she advised, “and pressure those leaders who say they’re concerned about inequality to do something about it.”

One student inquired about the balance between the public and private sectors when it came to housing and wanted to know if the private sector might be more effective in this regard. Routhier pointed out that developers are incentivized by making money, which is their goal. “There is simply not enough money to be made in making affordable housing compared to other kinds of housing. And even if they do mix affordable housing in to their developments, they will pick the highest level of ‘affordability’ in terms of rents that they can. Without strong government intervention, this won’t change.”

Rowan added that the private sector is already deeply involved through landlords who accept Section 8 housing vouchers. “It gives them a steady revenue stream,” he said, while also pointing out that “many societies not as wealthy as the United States don’t experience U.S.-levels of homelessness because of concerted efforts by the governments against control of the housing market by the private sector.”

Friedman was immensely pleased by the turn-out and the earnestness of the discussion. “We organized this event following Isaiah’s charge in chapter 58 that we must take care of our poor, not only because it’s right but also because it elevates ourselves. The Tzedek Society plans to do more of these events so that we can foster a culture of compassion and make ourselves better people.”