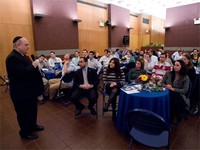 Jan 9, 2008 — Yonatan Frankel, who graduated from Yeshiva College last May, has a heavy workload as a rabbinical student at Rabbi Isaac Elchanan Theological Seminary but come the weekend he can often be found traveling to cities such as Portland, Seattle, Vancouver, Edmonton, or Calgary. Frankel is the head advisor of Northwest NCSY (formerly the National Conference of Synagogue Youth now known simply by the abbreviation), an organization dedicated to connecting Jewish teens in the United States and Canada with their roots. He sacrifices two weekends a month to extend NCSY’s mission to teenagers in the Northwest because he feels a responsibility to his fellow Jews, so many of whom know little about their own religion.

For over 50 years, Yeshiva University students have formed the core group of young men and women who spend their weekends at NCSY conventions with teenagers exploring all that Judaism has to offer. They travel across North America, often on the eve of midterms and functioning on little sleep, to share their enthusiasm for their heritage. The advisors help run and facilitate the events, but most importantly, they serve as approachable role models who learn, listen, and talk with the teens.

“YU students are perfectly placed for outreach because they can relate to these kids and have the knowledge to teach them,” Frankel said. “If we’re not doing this, then who will?”

Aliza Vishniavsky, a senior at Stern College for Women, echoes Frankel’s feelings. Involved in NCSY since she was in fifth grade, Vishniavsky has been an advisor in the Upper New York region for the past two and a half years. She is currently the region’s chapter coordinator, which involves managing chapter visitations and organizing local events.

“It’s great to see the teens a few times a year at conventions, but nothing compares to seeing them consistently once a month when I go upstate,” said Vishniavsky.

The most rewarding aspect of what she does comes “when I’m hanging out with the girls and they express how much it means to them that I am there for them,” she said. “It makes all the time that I’m giving up totally worth it.”

In recognition of the service of Frankel, Vishniavsky, and the many others like them, Yeshiva University and NCSY hosted a dinner and discussion recently for over 100 YU students who serve as youth advisors.

“The true heroes are the volunteer advisors who work behind the scenes,” said Rabbi Ari Solomont, director of recruitment and outreach for the Mechinah and Basic Jewish Studies programs and a former NCSY regional director himself.

Offering words of support and inspiration to the students were Rabbi Jacob J. Schacter, university professor of Jewish history and Jewish thought and senior scholar at the Yeshiva University Center for the Jewish Future; Rabbi Steven Burg, international director of NCSY; and President Richard M. Joel.

One of the challenges involved in outreach, said Rabbi Schacter, is recognizing the mindset of today’s youth in a world of endless choice and treasured individuality. “These kids were motivated to come into the room, we need to motivate them to stay, to help them understand the choice that they made and inspire them to continue to make that choice,” Rabbi Schacter said.

President Joel recounted his own experience working with NCSY and in outreach. “This can’t be just about you,” he said. “This is about building Klal Yisrael (the Jewish people). We have to allow people to hear the music of God.”