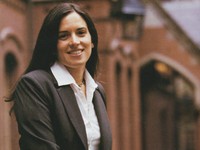 Jul 7, 2004 — If a journey begins with the first step, for Rachel Milner the path to world peace begins in Boston. In two simultaneous master’s degree programs-at the Harvard Divinity School and the Fletcher School at Tufts-the 1998 Stern College for Women alumna is studying religion’s impact on resolving international conflicts.

Ms. Milner is breaking ground in a relatively new field that affects many current world conflicts. “Religious leaders have incredible influence, which can be harnessed in good or bad ways,” she said. “They should be empowered so they feel they have a stake in the outcome of negotiations.”

Her interest in mixing religion and peacemaking reflects her strong attachment to the ideals of Torah Umadda. At Stern she majored in music and English communications, played in the YU Jazz Ensemble, and supported women’s participation, within the confines of Halakhah, in religious activities traditionally reserved for men, for example an expanded role in tefillah (prayers). “Combining religious and secular studies was a way of life and I wanted to continue that,” Ms. Milner said.

Juggling the demands of YU’s dual curriculum also prepared her for finding a niche in the world of global politics. “It helped me understand people in conflict overseas who have similarly merged interests and who are being sidelined by diplomats in political negotiations. It built a sensitivity in me,” she said.

A native of a Washington, DC, suburb, she grew up with an awareness of different people. She was raised in a traditional Jewish home and attended an Orthodox synagogue, but went to the interdenominational Charles E. Smith Jewish Day School in Rockville, MD. Her mother, a social worker, runs camps and programs for people with disabilities, while her father is a computer scientist for the US Department of Defense. “My father got me interested in civil service, my mother in recognizing the differences in people,” she said.

Her education in resolving conflicts began at the Program on International Conflict Analysis and Resolution (PICAR) at Harvard’s Weatherhead Center for nternational Affairs, where she worked as the program coordinator for one year. PICAR, which disbanded recently, brought together politically active and influential Israelis and Palestinians for conflict resolution workshops, and also focused on other areas of ethnic tension, such as Northern Ireland and Cyprus.

She said she gained much from the program’s emphasis on root causes rather than specific outcomes, such as borders. “The Israeli-Palestinian workshops gave both parties a forum to speak freely and identify roadblocks to improving the situation,” she said.

While working for PICAR, Ms. Milner tried out her own peace making skills as a court-appointed mediator in the Cambridge small-claims court. There she learned the power of talk. “The point was to open dialogue between the parties, rather than arrive at a bottom line,” she said. “An apology was often more important than money.”

Ms. Milner first became interested in conflict resolution when she witnessed a cultural clash between German Jews and Jewish immigrants from the former Soviet Union while working in Berlin as a Ronald Lauder Fellow in 2001. “We all like to believe that Jews are Jews, and it doesn’t matter,” she said. “But the Russians spoke a different language and came from a less traditional Jewish culture. The Germans were overwhelmed by their numbers-Russians made up 80 percent of the Jewish community.”

She found that the adult Jewish education program she created for both groups bridged some of the language and culture gaps. “They were all in the same boat, learning about Judaism together,” she explained. As an outsider, she could see both perspectives, but she also gained something more from her work abroad-a new awareness of the complex world of international affairs. “As an American who had traveled only to Israel, I had a narrow view of the world,” she said. “You don’t get a sense here of the world beyond our borders, but I think it’s important for America to be part of the international community.”

And so for now, all roads have led her to Boston-for Ms. Milner the
gateway to the world.