If you were a student at Stern College for Women from 1969 to 2015, and quite possibly even if you weren’t, you would have undoubtedly heard of the storytelling talents of Prof. Peninnah Schram. She is truly a legend and the “story about her stories” has been captured in Peninnah’s World, a fascinating new book by Dr. Caren Schnur Neile, affiliate professor at Florida Atlantic University and herself a writer and storyteller. The book is published by Hamilton Books, an imprint of Rowman & Littlefield.

About five years ago, Neile approached Schram about writing a book about Schram’s life as a storyteller, an offer which she declined. But Neile persisted, and a year and a half ago, she convinced Schram that it should be done because she had contributed so much to the world of Jewish storytelling. The book is written with a “bio-storying” approach, a term coined by Neile, with each chapter being a self-contained story that also includes some of the folktales that became formative in Schram’s life. “Through this book, my life becomes an ‘open story,” said Schram. 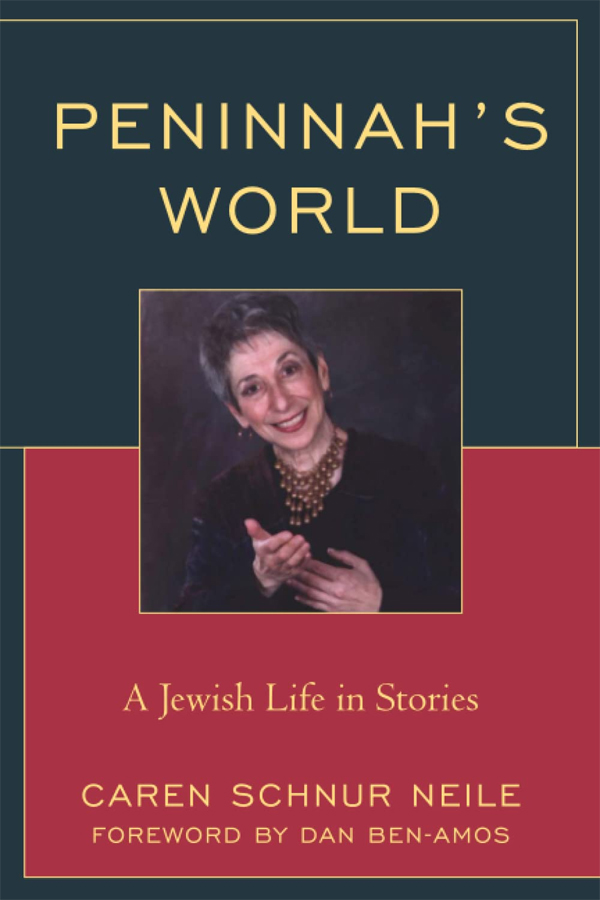 Neile begins with Schram’s childhood in New London, Connecticut, the daughter of two immigrants: her father, a chazzan [cantor], shochet [ritual slaughterer] and mohel [one who performs a bris] from Lithuania, and her mother, from White Russia (now Belarus). “They both had intuitive wisdom,” Schram explained, and that wisdom played a large part in her journey to becoming the storyteller and writing professor for which she is renown. “Both told me stories that stayed with me all my life; as well, they gave me the gift of loving stories and teaching through stories,” said Schram.

This delightful and entertaining book introduces the readers to people who influenced her, such as Elie Wiesel, to whom she was introduced in the 1970s by Dr. David Mirsky z”l, dean of Stern College at the time. Meeting him was “a highlight of my life,” said Schram, and years later, he contributed a foreword to her first anthology and invited her to teach a session in his seminar at Boston University. “He became a mentor of mine, although he didn’t know it,” added Schram.

Also explored is her journey to becoming a college instructor, first at Iona College in New Rochelle for two years and then to Stern College in 1969, where she taught hundreds of appreciative students, some of whom have become well-known storytellers in their own right, until her retirement in 2015. She is immensely proud of the three Jewish Storytelling Festivals she organized and led at YU, “with the enthusiastic support of Dean Karen Bacon,” the Mordecai D. Katz and Dr. Monique C. Katz Dean of the Undergraduate Faculty of Arts and Sciences at YU.

The book is filled with warm anecdotes of Schram’s experience as a professor and storyteller, including the time a student thought she was mistakenly speaking in a foreign language class since Schram was speaking gibberish as a teaching tool. Another is about a memorable interaction with an audience member as a featured storyteller at the 1985 National Storytelling Festival in Jonesborough, Tennessee.

Still delighting audiences around the globe, Schram continues to give storytelling performances and teach the art of storytelling to all ages.  Occasionally, she returns to Stern College to teach a storytelling workshop in the Legacy Heritage Jewish Educators Program taught by Dr. Deena Rabinovich, and is invited by Dr. Karen Shawn, associate professor at the Azrieli Graduate School of Jewish Education and Administration, to teach the storytelling class.

“The book focuses on chapters on my storytelling life and how the oral tradition is once again being appreciated and acknowledged as an effective art and craft,” said Schram. “After all,” she continued, “the oral narratives, not only sacred stories but also folktales, have always been, and continue to be, important and powerful in Judaism.”