When Phil Friedman, chief executive officer of Computer Generated Solutions (CGS) and vice chairman of the Yeshiva University Board of Trustees, learned Hebrew for his bar mitzvah, he had to study in secret because in the Soviet Union of the 1960s and 70s, outward expressions of Jewish spirituality were discouraged and even punished. 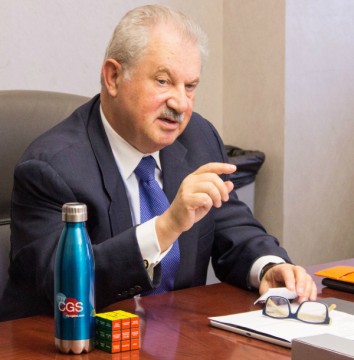 to the United States in 1976 in search of a new life that would allow him to embrace Judasim wholeheartedly. He took the $500 in his pocket and his background in electronic engineering, economics and finance, and parlayed them into CGS, an international technology company that offers business applications, sophisticated enterprise learning, technology support and BPO (business process outsourcing).

Even as CGS became highly successful (it now employs over 7,500 professionals in North and South America, Europe, the Middle East and Asia), Friedman never lost sight of the fact that religious education was something every Jew should have the privilege of pursuing, regardless of where they live. He immersed himself in YU’s mission, joining the Sy Syms School of Business Board in 2003 and receiving an honorary degree from YU in 2011. In 2008, Friedman launched the Alexander Friedman Scholarship Fund, which not only honors the memory of his father but also the community that instilled in him a respect for learning and the power of traditional Judaic values.

The fund can award up to 15 need-based scholarships each year, complete with offers of paid summer internships at CGS for the students and possible full-time employment once they graduate. 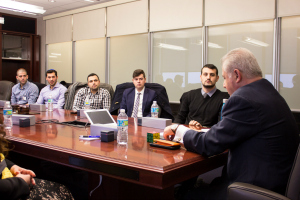 Friedman spoke movingly about his upbringing in the Former Soviet Union and how his community struggled to keep its faith alive. He recalled a turning point in his life that occurred during a trip to Auschwitz when he stood before a crystal urn full of ashes and could not stop crying. “I grew up without knowing any of my grandparents, uncles and aunts, who were murdered during the Holocaust, and I realized that it was their ashes in that urn.” He knew then he needed to take the risk and leave home.

Friedman’s primary charge to the students was to “become leaders in your future lives. You have chosen to go to this institution dedicated to the Jewish people and to Jewish life, and you must become good, proactive Jews.” He added, “Being a good Jew is the same as being a good human being. Don’t shy away from taking responsibility. Don’t wait for anyone else to do it. You can make a difference, and that is what I would like to see from all of you.”

Adir Alon, who grew up in Haifa, Israel, and went to a Baptist college in North Carolina before attending YU, spoke for many when he said that the scholarship made it possible for him to attend the University. He is now an upper senior majoring in marketing at Sy Syms, and plans “to represent Israel in the world and become an ambassador of the country which gave me so much, and to which I would like to give something back in return.”

Ferreira, originally from São Paulo, Brazil, is studying business management and marketing at Sy Syms. “I am honored to receive support from such an outstanding and generous man who continues to use his professional success as a way to help international students achieve their academic and professional goals,” she said.

As they parted, Friedman repeated a point that he had made with them several times earlier in his talk: “If and when you are in a position to help another Jewish student, I expect you to stand up and do what is right. I don’t need any thanks; I only want you to promise that you will do for someone else what this scholarship has done for you.”