On Feb. 6, 2020, the Zahava and Moshael Straus Center for Torah and Western Thought and the Pepperdine School of Public Policy presented a panel on “The Role of Religion in Politics and the Role of Politics in Religion” celebrating the release of the Straus Center’s best-selling book Proclaim Liberty Throughout the Land: The Hebrew Bible in the United States (Toby Press, 2019).

The event, hosted on Pepperdine’s campus by Dean Pete Peterson, Braun Family Dean’s Chair and Senior Fellow at the Davenport Institute, featured Straus Center Director Rabbi Dr. Meir Soloveichik; Wilfred McClay, author of the recent Land of Hope: An Invitation to the Great American Story (Encounter Books, 2019), who serves as the G. T. and Libby Blankenship Chair in the History of Liberty at the University of Oklahoma and 2019-2020 Ronald Reagan Professor of Public Policy at Pepperdine’s School of Public Policy; and Montse Alvarado, VP & Executive Director of the Becket Fund for Religious Liberty.

Following introductory remarks by YU alumnus Dr. Michael Helfand, Associate Dean for Faculty and Research and Professor of Law at Pepperdine’s Caruso School of Law, and Dr. Stu Halpern, Senior Adviser to the Provost of Yeshiva University and Senior Program Officer of the Straus Center, Peterson led the panelists in a lively discussion on the role of the Hebrew Bible in America, including, as Proclaim Liberty demonstrates, how the Puritans, and many Americans since, viewed their story through the lens of the Israelite story of the Exodus (what McClay referred to as “the template for the American imagination”). The biblical narrative inspired the naming of cities in early America (Canaan, Salem, Bethel, Goshen and Hebron), served as a conceptual building-block for the Founding Fathers (who saw the revolution against the British through a biblically inspired prism) and provided much of the language used by African slaves striving for freedom during the Civil War era. 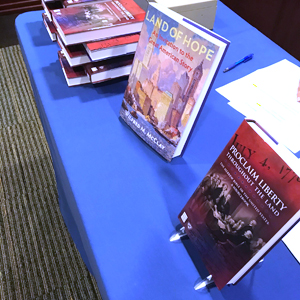 Moving beyond the history of early America, the panelists discussed the United States as a home for the Jews, the “covenantal calling” felt by many Americans who drew inspiration from the Hebrew Bible, and the responsibility to the world that accompanies the belief in one’s chosenness. As Alvarado argued, defense of contemporary religious liberty aligns with the core values of the American founding and “America is an incomplete thought without its Hebraic roots.” The panelists agreed that the loss of the “common language” of the Bible in our era has led to a “flight from memory” in which the past is viewed as irrelevant, resulting in attacks on religious liberty and a loss of common civility.

Dr. Soloveichik emphasized that the Bible is not the sole source of the American idea but rather that the American ethos is a “double helix” of individual rights as articulated by John Locke and the value of covenantal responsibility. It is towards a balance of these two guiding principles that Americans should continue to strive. As McClay noted, during the Jewish holiday of Passover and its intergenerational seder ritual, there is “memory making” in which the individual is called upon to connect with a narrative beyond his or her individual self. This aspiration towards freedom, Alvarado stressed, “is an invitation” towards finding identity in community and seeking to preserve liberty.

The Straus Center and Pepperdine look forward to continued programmatic collaborations in the years ahead. To read reviews of Proclaim Liberty visit the Straus Center’s website. The volume can be purchased here.